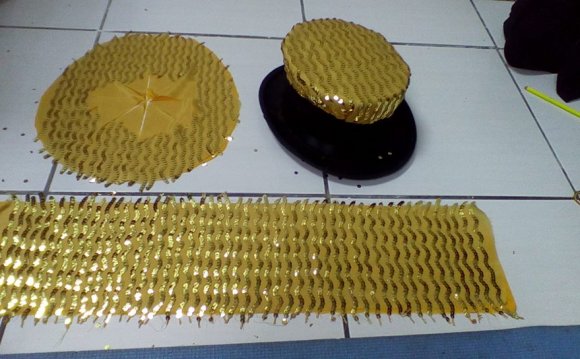 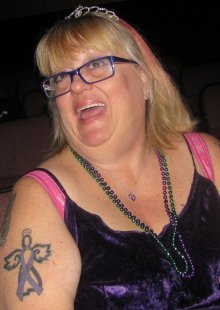 Alice first saw The Rocky Horror Picture Show circa 2008—and it was really The Rocky Horror Show, performed as a musical theatre performance by a semi-professional cast. Six months later, her son (Randy) introduced her to the film itself on DVD. It wasn’t until January 2010 that she saw a live shadowcast perform the show when viewing Completely Crazy in IL.
She grew up during the time it first became popular—in the 1970s—but had never seen the film. Introduced to the experience, Alice was pleasantly confused. “My first thoughts were ‘this is weird, interesting, and fun all rolled into one.’ I wasn’t sure what to look at: the movie or the actors. I was kind of overwhelmed at first, but the more the night went on, the more fun I had, ” she explained.
Her favorite character is Columbia, especially her personal floor show—which is also Alice’s favorite scene. Columbia is “colorful, quirky, and fun, ” Alice noted. Her favorite audience participation line, however, is “what’s that smell; cover it up” (yelled to Janet, during her personal floor show). She also enjoys the line to the Criminologist about the “diabolical chicken” on his forehead.
“Help Me Mommy is a great cast. They really give their audience a fun-filled night, ” Alice stated. She loves Kung Fu night “it’s a LOT of fun and very unique, ” Alice noted. She continued, “The dance parties are always a blast. I’m really looking forward to pajama night, which is coming next month [in April]. Help Me Mommy has the best theme nights I’ve had the pleasure to attend.”
While she may have arrived late to the Rocky Horror party, she doesn’t intend to leave early. “I will always be a fan of Rocky Horror, and Help Me Mommy has a special place in my heart, ” Alice explained.
“If it weren’t for my son introducing me to The Rocky Horror Picture Show, I might not have ever seen it—and, in turn, I never may have met such a wonderful group of people who are like ‘family’ throughout the entire Rocky community. They gave me the strength I needed to turn my life around for the better. Yes, Rocky Horror definitely saved my life, ” Alice concluded, referencing the documentary in progress, Rocky Horror Saved My Life, which filmed at the Hobart show—as well as many other venues, internationally—in 2014.