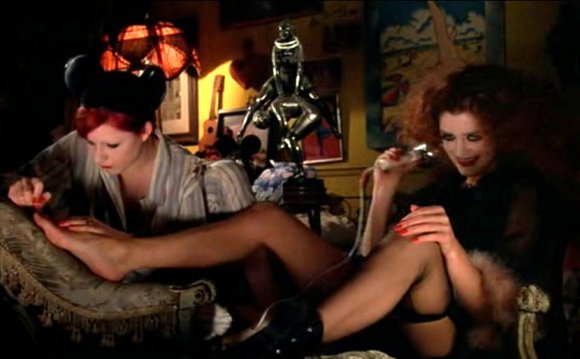 is the fifth episode of second season and the twenty-seventh episode overall. It premiered on October 26, 2010. It pays tribute to the 1975 film, The Rocky Horror Picture Show.

An EP, , accompanying the episode was released on October 19, 2010. Seven songs from The Rocky Horror Picture Show were covered in this episode.

Will decides to have to the glee club perform The Rocky Horror Picture Show for the annual school musical after learning of Emma's newfound love for the cult classic. Despite Sue's usual scheming, the members of New Directions inject their distinctive style to the show's timesless tracks. As casting begins, Emma calls in Carl who auditions for the role of Eddie, much to Will's dismay. His audition song in the choir room surprises the Glee Club, and so Will gives in. As casting progresses, Will finds it hard to find the right people for the parts because the musical is very controversial. Will the musical go through as planned? Or is Will's choice and motivation to produce the school production questionable?

The episode was directed by Adam Shankman and written by Ryan Murphy with assistance on the story from Tim Wollaston.

Carl and Emma at The Rocky Horror Picture Show

The episode opens with the red lips of glee club member Santana in a black background as she sings . In the McKinley High auditorium, the New Directions members rehearse The Rocky Horror Show, singing, which is interrupted by Dr. Carl Howell, who accuses club director, Will Schuester of trying to steal his girlfriend, school guidance counselor Emma Pillsbury.

The episode continues in flashback format, with Will recalling the events leading up to Carl's accusation. When Will learns that Emma and Carl attended a midnight screening of The Rocky Horror Picture Show which has helped to lessen some of her obsessive–compulsive behaviors, he decides to direct a school production of the musical, with members of New Directions as the cast members.