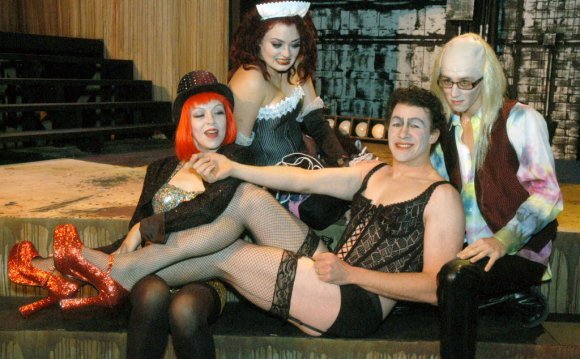 Easiest Frank costume: There is no easier Frank outfit than what he wears in the lab when he axes Eddie. What you'll need is costume makeup, a big "pearl" necklace (large white beads will work just fine), black platform sandals, pink dish washing gloves, black fishnet stockings, a wig and a green surgeon's gown with a red triangle on the left breast. As an added effect, you can decorate the surgeon's gown with some blood splatters for that just-killed-Eddie look.

The easiest Columbia look: During the performance of "Toucha Toucha Touch Me, " while hanging out with Magenta and spying on Janet and Rocky, Columbia is in vertical-striped blue and white men's pajamas, open-toe black heeled shoes, with all her makeup is removed with the exception of lipstick, and she's wearing Mickey Mouse ears on her head (minus the logo). If you want to be really authentic, you could go braless and place a few strategic rips in the PJ's, but that's up to you.

Riff Raff spends the movie wearing a sort of butler's outfit. Long black pants, a black jacket, and a white shirt. At the end of the movie he dons a futuristic spaceman type outfit.

Magenta is the maid of the castle. She wears a black dress with a little white apron over it and a little white hat. At the end of the movie she puts on a spaceman costume that matches Riff Raff's.

Janet starts the movie dressed in a dapper little suit consisting of a white sweater over a pink dress and with a fancy hat. At the end of the movie, Janet along with many other characters, is dressed in a corset and thigh-highs that match Dr. Frank-N-Furter's.

Easiest Janet costume: Janet allows you the option of going in simple underwear: white bra, white panties, white slip, purse, and skin-toned stockings, but again, some people prefer more cover. So other considerations include the lab coat look in the creation scene, the bedroom robe, or wearing an orange sheet in a towel-like fashion, like Janet hiding her shame when she's discovered with Rocky by Frank, Brad and Doctor Scott.

While the option of going in white briefs, socks, a watch and glasses is a pretty simple one for Brad, if you'd like more cover, you can opt for a white knee-length lab coat as seen in the lab scene where Frank reveals Rocky, or you can wear a light blue satin robe like the one thrown at Brad when he's led to the bedroom. Keep on your socks, glasses, watch and underwear regardless of which of the three looks you choose.

Rocky has one of the simplest costumes, he wears a pair of itty bitty gold shorts. If you want to go as a more modest Rocky, you can go as Rocky before they removed the bandages or you can go with your bottom half covered by an orange sheet. If you do decide to go in the undies, use padding so everyone doesn't have to see your "equipment." Female Rockys should use an unpadded, underwire nude bra to prevent any breast escapes.

The Transylvanians' outfits are all based on tuxedos, but each Transylvanian adds her or his own touches. Colorful sashes, funny little hats, fancy sunglasses, they're all fun and bright.

What About You...
If you went to see Rocky Horror Picture Show who would you dress up as?