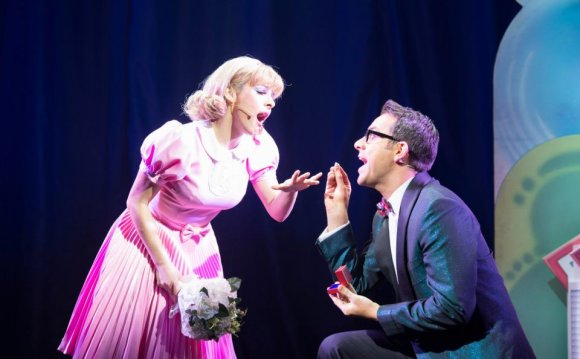 Click here to read some of the comments from the audience...

With the biggest and starriest line-up for years and the BIGGEST GIANT in pantoland, Jack and the Beanstalk will be a pantomime you wont want to miss!

Heading the cast as the beautiful Princess Tamara is local superstar and star of BBCs award winning Tracy Beaker and Strictly Come Dancing DANI HARMER, who is currently touring the UK in Richard OBriens legendary Rock musical The Rocky Horror Show as well as appearing as Tracy Beaker on television screens around the world.

Joining Dani will Coronation Streets Reg Holdsworth aka KEN MORLEY as the King of Merrydale and playing the hero Jack is EMMA BARTON, Eastenders Honey Mitchell. They will be joined by Radio Berkshires DEBBIE MCGEE who appears as the beautiful and magical Queen of the Flower Fairies

Joining as Simple Simon is the hilarious comedian and impressionist JON CLEGG with a host of comedy characters and family fun.
RICHARD MORSE reprises his role as the Giants henchman Fleshcreep. The headline cast is completed by PAUL MORSE, one of Britains top dames, currently on the UK tour of Rising Damp who will play the hysterical Dame Trot.

With all the trimmings that youve come to expect from the regions biggest panto including spectacular sets stunning costumes, live music and the messiest and craziest slapstick scenes in panto, make sure you book your seats now as many performances are selling out quickly.

BEN FORSTER - Once In A While (Rocky Horror Live screening ...