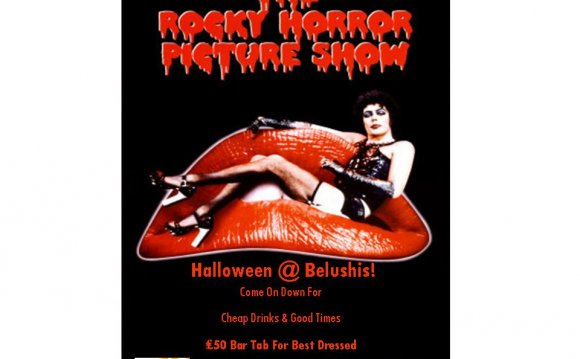 Join us as we celebrate the 40th anniversary of this cult classic film!

Sweethearts Brad and Janet, stuck with a flat tire during a storm, discover the eerie mansion of Dr. Frank-N-Furter, a transvestite scientist. As their innocence is lost, Brad and Janet meet a houseful of wild characters. Through elaborate dances and rock songs, Frank-N-Furter unveils his latest creation: a muscular man named “Rocky.”

Audience Participation started back in the 1970’s. Originally only for the movie, the ‘AP’ has become a part of the stage show as well. Fans have been dressing up, shouting back lines and singing along to the show for forty years now.

Audience participation should always be complementary to the show, never just shouting out lines for the hell of it. The following two responses will get you started in the wonderful world of talk-back.

There are hundreds of talk-back lines that have been used over the years, and more are created by the audience at every show. There is no such thing as a definitive Audience Participation script as often call back lines are topical – Rocky being called a Pokemon worked in 2000, but isn’t so funny now. To paraphrase the great philosopher Roger Rabbit, ‘it only works if its funny’.

It should be noted that many lines that are used at the film screenings don’t translate to the stage productions. Shouting ‘where’s your neck?’, for instance, to every narrator just doesn’t work as, unlike Charles Gray in the film, most do seem to have one.

“Etiquette?” I hear you cry – “at a show with the principle of ‘Don’t dream it, be it?’”. Yep, there still are a few things to bear in mind when you are partaking in the Rocky experience.

The idea of Rocky Horror participation is to have fun, not disrupt the show. The following guidelines will help you and the other members of the audience to enjoy the show to the maximum pleasure level.

1.If you are dressing up for the show, don’t criticize other people’s costumes. Everyone has the right to wear whatever they wish. Some people make carbon-copies of the stage costumes, others take a more abstract approach. Some don’t dress up at all.

2.Talk-back lines should be used to add to the Rocky experience, don’t try to shout down other people, they might know some better lines, the best lines are the unexpected, especially if the cast start to giggle!

3. For safety reasons, the only props allowed in the theatre will be the audience participation kits sold in the lobby prior to the show. Please note that it is considered very bad etiquette to throw something onto the stage, it could mean that the show is canceled and a hundred fans turn on you in an instant!