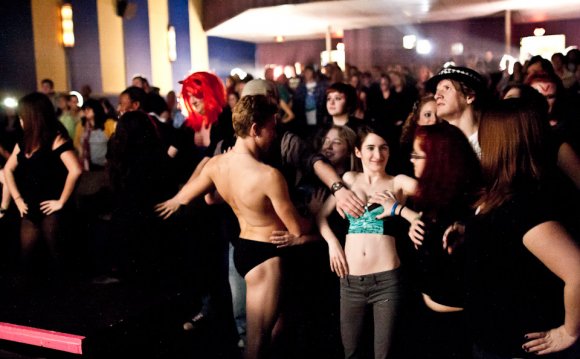 August 14, 2015 marks the 40th anniversary of the original premiere of The Rocky Horror Picture Show, one of the most persistently popular cult classics and Halloween favorites of all time.

For those not in the know, let’s take things all the way back to the basics: The Rocky Horror Picture Show is a movie. That’s all, nothing more. Okay, well that’s not entirely true: it’s a musical. It’s a musical movie. Really. That’s it. Remember Into the Woods last year? It’s like that. 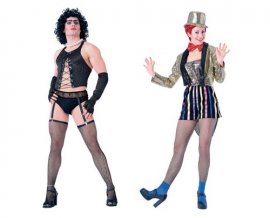 Yes, that’s right, you go see it. You go see this movie that was released in 1975. And how am I so confident that you’ll be able to go out and see a movie that is 40 years old? Is it because it’s the anniversary? Nope! You can always find a place that’s playing Rocky Horror, no matter the year. For decades, it has been in near constant rotation.

It is, simply put, an interactive movie known for it’s eccentric cast, it’s irreverent story, it’s exhilarating songs, and it’s unrivaled audience participation rituals. That’s what we mean when we say it’s an experience. Rocky Horror is a movie you dress up for, bring props to, and yell at the top of your lungs all throughout.

A lot of people are introduced to Rocky Horror in college, when that one friend who somehow always knows what’s going on everywhere suggests they go see a showing. Whether you’re a college student in the same boat or just someone whose interest has been peaked by our header image, here are some of the things you can expect at your first showing: 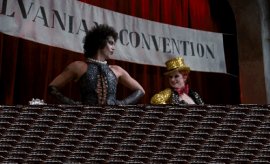 While Tim Curry’s iconic turn as Dr. Frank-N-Furter is the film’s most recognizable outfit, just about every look in the film is a classic at this point. And when you go to see Rocky Horror, you’ll see plenty of people dressed up as their favorites. There is no requirement to wear a costume, and no stigma for not doing so (Rocky Horror fans are known for being as kind and welcoming as they are passionate about the film), but we happen to feel that everything is more fun in costume.

Almost as iconic as the film’s costumes are its signature dance—the Time Warp! With a mix of strange, seemingly nonsensical lyrics that always circle back to the song’s emphatic refrain—“Let’s do the time warp AGAIN!”—the song is a perfect representation of the film itself: you may not always know what’s going on, but you’re having fun regardless. And for any of our readers who may have two left feet (or two right feet; that doesn’t sound like a great setup for dancing either), have no fear! This is one of the easiest dances around. Plus, they explain it to you in the film! (Seriously. There are even easy-to-follow diagrams!)

At Rocky Horror, seeing isn’t believing. You really have to feel the show. Is there a wedding happening on screen? Then get out your rice and throw some in the air to celebrate! Is it raining? Well then set the mood with some water pistols! There are opportunities to use props throughout the film, and while different theaters set different limitations on what is and is not allowed, you can be sure that something will be thrown in the air before the final credits roll.