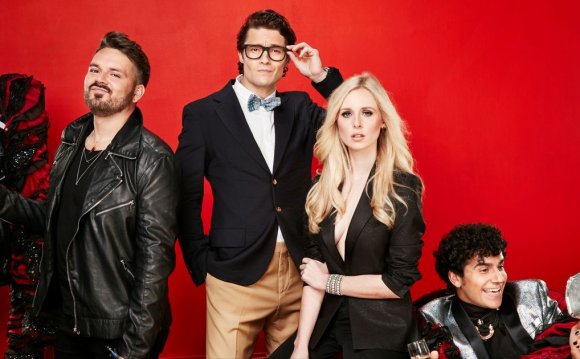 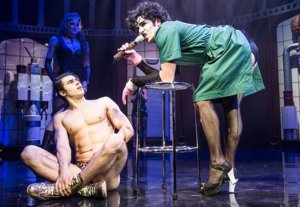 In the velvet darkness of the blackest night, the Manchester Opera House bursts alive with the colourfully flamboyant sexual spectacle that is Richard O’Brien’s The Rocky Horror Show.

Fresh from a run in the West End, the show returns to Manchester for a limited two-week run (until January 16) with a cast headed by X-Factor’s Diana Vickers and Emmerdale’s Ben Freeman alongside a host of West End stars.

When the newly-engaged Brad Majors (Freeman) and Janet Weiss (Vickers) get a flat tyre, they’re forced out of the rain to knock on the door of an imposing castle to ask to use their telephone.

From there on in, their fate is sealed as they stumble upon the party of the Sweet Transvetiste, Dr. Frank-n-Furter, to celebrate the creation of his perfect man, in an X-rated cross between the Sci-Fi movies of the 1950s and Frankenstein.

Aside from pantomime, Rocky is perhaps the only show where audience participation is key –and during Monday night’s opening the audience were on fine form.

With insults, retorts and sexually explicit heckles clearly rehearsed by the well-versed audience of Rocky fans, equipped with their toolkit of torches, party hats, newspapers and playing cards all ready for certain elements of the show where they join in replicating the action on stage.

With this in mind, when our narrator for the evening, Coronation Street’s Charlie Condou, corpsed and forget his lines due to a heckle, the army of fans were ready to encourage him and continue on – offering him his next words.

This didn’t detract from the fun of the show, as this character’s breaking of the fourth wall and participating with the audience is a much-loved aspect of the show. And were they on form !

Costumes and all, with Ann Summers clearly doing a wonderful trade in suspenders – and that’s just for the array of men in the audience dressed as the beloved characters on the stage.

With direction by Christopher Luscombe, Freeman and Vickers made an excellent pairing as sexually liberated Brad and Janet, and shattered my initial reservations with their enthusiastic and impressive portrayals of the characters.

With roles that could be performed without the best singing, the pairing impressed the Manchester audience massively, taking the characters, made famous by Susan Sarandon and Barry Boswick, as their own with their impressive vocals, dynamic interactions and wonderful comedy timing.

Our Frank-n-Furter for the evening was Liam Tamne. His glittering performance was overtly sexual, as the role requires, but in comparison to other incarnations of the role I’ve previously seen, this sexualisation was taken to a shocking new level – including the sexual stimulation of a microphone and explicitly implied bedroom antics.

A voyeuristic delight, there were gasps from the audience around me, which suggested the performance had indeed been ramped up for the new tour, and done so with great gusto from a fabulous performance from Tamne.

For me though, the evening was stolen by our ‘Riff-Raff’ for the evening, Kristian Lavercombe.

Having played the role more than1000 times, the alien character originated by Richard O’Brien hobbled menacingly around the stage with his anti-matter ray gun, and reached stratospheric heights with his vocal acrobatics.

Bedecked in basques and suspenders, and with the whole cast experiencing Meg Ryan-esque orgasms throughout, 40 years since it’s inception, the show is clearly still pleasuring audiences everywhere.

O’Brien’s lyrical genius still amuses, (who else could rhyme ‘sensual’ and ‘pencil, ’ ‘hurt her’ and ‘Frank-n-Furter’ and ‘Janet’ and ‘exammit’?)

Supported by a x piece orchestra, the Opera House was rocking and twice during the show, the entire theatre was on its feet dancing ‘The Time Warp’ lead by Riff-Raff.