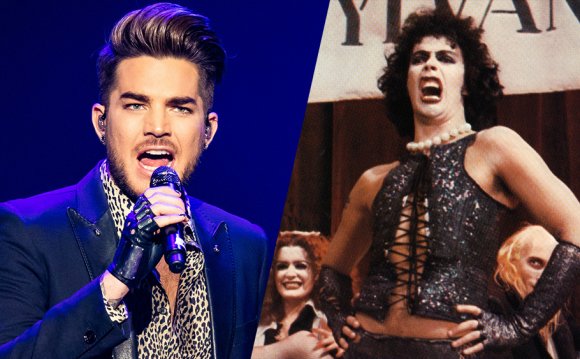 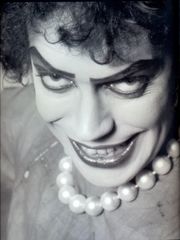 Dr. Frank N. Furter is the main antagonist of The Rocky Horror Show stage production, and later the 1975 film adaptation. He is a promiscuous, bisexual, cross-dressing scientist from "the planet Transsexual, in the galaxy of Transylvania." He is portrayed by Tim Curry in both the original stage production and the film.

Frank is holding an annual, Transylvanian science convention at his castle to showcase the birth of his newest experiment, "Rocky Horror" - a fit, attractive man created solely to fulfill Frank's sexual desires.

While the convention is going on, virginal, newly-engaged couple Brad Majors and Janet Weiss are travelling through the area to visit their friend and former tutor Dr. Everett Scott, to inform him of their engagement. When one of their tires blows out, they stop at Frank's castle in hopes of using a telephone (it is later implied that Frank is the one who gave them the flat).

They are invited inside by Riff Raff, the hunchbacked butler, and meet the other Transylvanians, as well as the maid, Magenta - Riff Raff's sister, with whom he is in an incestuous relationship, and Columbia - a human groupie who is infatuated with Frank. 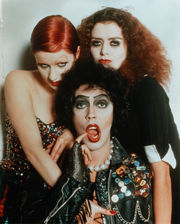 Frightened and disturbed, Janet tries to persuade Brad to let them leave the castle, but she is interrupted when Frank makes an appearance. He announces he will call someone to fix their car and offers them hospitality, meanwhile inviting them up to his laboratory to witness the birth of his creation, subtly implying he will later sleep with both of them.

Brad and Janet are stripped down to their underwear and ushered to the lab by Riff Raff, Magenta and Columbia, where Frank flirts shamelessly with them both and brings his creature to life, as they watch with the other Transylvanians.

Rocky, confused and frightened by his situation, flees from a lustful Frank, who later flags him down and presents him with an array of fitness "birthday" presents, revelling in his success.

Frank's celebration is interrupted when Eddie, an ex-delivery boy and former lover to both Frank and Columbia, emerges from the freezer where he was stored after half of his brain was used to make Rocky. He describes his past life and explains his current situation to the Transylvanians, as well as engaging in a romantic reunion with Columbia, stealing Frank's spotlight.

Jealous and enraged, Frank chases Eddie back into the freezer and murders him with a pick axe. He then tries to brighten the shocked conventionists' moods by unveiling a bridal suite built for him and Rocky. A wedding procession ushers the two inside, where they sleep together.

Later, Frank enters Brad and Janet's separate rooms, disguised as the other, and seduces them both into sex. While sleeping with Brad, he is informed by Riff Raff on a television monitor that Rocky has escaped and Janet is loose in the castle (though he and Magenta chased Rocky away purposely out of spite for Frank).

Frank heads downstairs to the laboratory with Brad and Riff Raff, mercilessly beating the butler for losing sight of Rocky. He commands him to search for him on the monitor, and Riff Raff instead discovers that Dr. Scott is approaching the grounds.

Brad recognizes him and Frank accuses him of purposely coming to the castle in an attempt to expose him and the others to the government as aliens, which Brad denies. Frank tells Riff Raff to bring Dr. Scott to him, and informs the rival scientist that his plans have failed.

Dr. Scott also denies Frank's accusations, stating that he has no idea why Brad is at the castle, and his reason for coming here is to find Eddie, his nephew. Frank is upset and irritated by this, later discovering a half-nude Janet and Rocky in the birth tank in which his creation was made, where the two have been sleeping together.