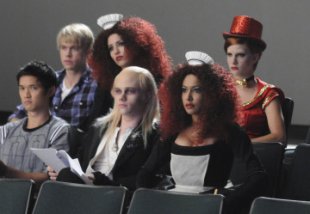 In one sense, “The Rocky Horror Glee Show” was exactly what I expected: an episode in which the cast of Glee performs songs from The Rocky Horror Picture Show, with the thinnest of plot justifications for doing it and characters behaving inexplicably in order to fulfill the episode’s music demands. In other words, it was no better than I thought it would be, nor was it bad in a way that especially surprised me.

Where the episode did become interesting—if not actually good—was not in the show’s longterm stories (which it did little to advance) or the musical’s themes and sexual complexities (which it watered down or ignored), but in how it worked as a weird, unintentional metacommentary on the GQ Glee photo spread the world freaked out over last week.

The photo shoot controversy, after all, boiled down to what audience Glee is for, and what kind of sexuality is appropriate for actors playing teens and the teens watching them. And insofar as “Rocky Horror” had a theme, it was just that: the discomfort of representing sexuality among an age group that is, nonetheless, sexual, and the complications that ensue when adults enter the picture.

One issue with the GQ photo—and a typical one for men’s-mag layouts like that—is that it stripped down and objectified the two women in the shoot while Cory Monheith Monteith stayed clothed. So it was oddly ironic at least that this episode focused on male objectification and body-image issues, and climaxed with Finn walking through McKinley’s halls in his underwear. (“Guys objectify us all the time, ” said Quinn, played by Diana Agron, one of the two actresses GQ got to show off skin for their readers.) And the conflict running through the episode, based on the glaring inappropriateness of Rocky Horror for a high school musical, is a pretty fitting meta-commentary on Glee.

With this material to work with, there was probably an actual good episode of Glee to be found in here somewhere, but the way co-writer Ryan Murphy engineered the conflict was a mess in so many ways. For starters, the show has always wavered on how realistically it wants to depict the content guidelines in its fictional educational environment. Sometimes this is an environment where adults are scandalized by performances like “Push It, ” from the first season, but it’s also a world in which a show choir’s killer competition number is Amy Winehouse’s “Rehab.”

What’s more, Mr. Shue’s sense of content-appropriateness is not even consistent within the same episode. He begins by impulsively assigning the musical, then immediately recognizing that he’ll have to cut a lot of age-inappropriate material from it. Then he realizes that it is maybe not that great an idea to put a high school boy on stage in gold underwear—but, for some reason, thinks the better solution is to cast himself in a role that will have him basically doing a stylized sex scene with his own student, Rachel, in “Toucha Toucha Toucha Touch Me.” (Fortunately the production never got that far; unfortunately I still have that image of shirtless Matthew Morrison searing my retinas.)

There are two problems at work here: one, that the show is again reaching for whatever contrivance it can to work in the week’s music, and two, as Todd Van Der Werff wrote at the AV Club, that Will basically stopped being a character and became a plot-movement device a long time ago. Added to that is the troublesome question of what Will does decide to cut: for some reason, while the skin and implied sex is OK, the references to transsexuality gender subversion—which you may also know as the major subject of Rocky Horror—have to go. (E.g., “transsexual Transylvania” in “Sweet Transvestite” becomes “sensational Transylvania.”)

I’ll admit that I’m not a Rocky Horror fanatic—I’ve seen it once or twice, never in a theater or in costume—so I leave it to those who are to judge how Glee staged the show. But it just makes no sense to deal with the musical while ignoring that major theme—especially in a show so concerned with sexual identity and otherness as Glee.

If the episode addressed the reasons why the production had to avoid dealing with transsexuality these themes, I’d buy that; to essentially sidestep it just seemed bizarre. To watch this episode, you would think that the main transgressive element of Rocky Horror was showing characters in their underwear. I could see why Kurt might not want to play Dr Frank-N-Furter (though I could just as easily see him wanting to), but not getting into why he preferred not to seemed like a missed opportunity. As was Sam’s storyline, which could have been an interesting subplot about adolescent boys and sexual pressure, but was undercut by the episode’s suddenly turning him into a complete ass. (And casting adults in the musical was creepy, unbelievable and again seemed forced simply to service the Will-Emma plot.)

When you have an episode of Glee in which Sue Sylvester ends up being the voice of reason, you’ve either got a work of genius or a failure, and “Rocky Horror Glee” was the latter. I’m not sure it was a good thing that I was cheering her on by the time she was nitpicking the pacing and logic of the production.

“When pushing boundaries is [artist’s] only aim, ” Sue editorialized, “the result is usually bad art.” She was talking about sexual shock for shock’s sake—and arguably giving voice to people who have critiqued Glee for just that—but in a broader sense her message was: simply throwing a bunch of button-pushing junk on screen to provoke a reaction does not a coherent narrative make.

Granted, throwing together disparate wild elements to build to emotional climaxes is what Glee does at its best, and in a better episode of Glee, I’d give the show credit for embodying it’s own critique. Here I just have to say: next time, listen to Sue.

* Light on the Brittany-isms this week, but I would love to see someone dressed as a peanut allergy.

* “They have the Internet, they are exposed!” Again, I realize that any commentary on the GQ spread here is entirely unintentional, but the similarities were really eerie.

* Another thing I might have enjoyed/forgiven in a better episode was Will’s comparison of Rocky Horror—for “outsiders”—with the glee club, and by extension, the show Glee itself. Here, it just seemed self-congratulatory and unearned. (Also, a better episode would have made the point through example, not lecture.)