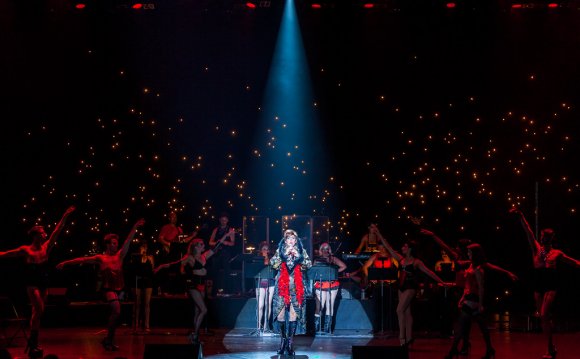 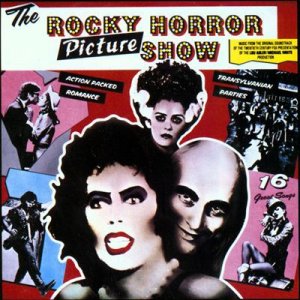 “The Rocky Horror Picture Show, ” delivered by shadowcast, Frankie’s Favorite Obsession, is an electric and retro blast into the past that revolves around the glam-rock-ified version of “Frankenstein.”

“The Rocky Horror Picture Show” was notorious for its showings at midnight in the 1970s; it is a reigning tradition for the favored flick to be only shown at 10 p.m. and during the first Saturday of every month. As a longtime fan of the classic movie, catching a showing of it is a tedious challenge; however, after many hopeless nights of longing, I finally attended the show. For $9, I was able to get into the show, and obtain party hats, rubber gloves, noisemakers, confetti and much more, which were used for the interactive experience.

As I entered the theater, the ambiance amplified the true meaning of teenage years, as the night-drowned lobby was filled with exuberant movie-goers and die-hard fans that dressed up like characters from the film. Upon looking amongst all the people and the groovy atmosphere they radiated, I knew that I would go home with an unstoppable grin and heavy heart.

Is “The Rocky Horror Picture Show” actually a horror movie about a boxing champion? Nein. The ‘70s classic brings a tale of a somewhat glam-rock version of “Frankenstein.” The story begins with young newlyweds, Brad Majors and Janet Weiss, who obtain a flat tire when driving through the rain and stumble upon Dr. Frank-n-Furter’s castle. Hoping to call a friend to pick them up, the couple find themselves in a party for the transgender doctor, as he successfully and scientifically creates Rocky Horror, a man with blonde hair and a tan.

Rather than simply watching actors deliver the movie, or watching the movie project on a screen, the theater cleverly uses both methods: having actors act out the film while it is playing in the background as a backdrop.

The main reason why “The Rocky Horror Picture Show” has outlived so many decades is its creativity. Most theaters would only allow patrons to simply sit and view the movie, while remaining silent. The show advocates the polar opposite and encourages movie-goers to yell at the actors and throw the props that are provided during specific scenes.

The actors who portrayed the characters mirrored the personalities eloquently, harboring the same energy the cast had back in the movie, such as Brad’s annoyance, Janet’s innocence, Dr.Frank-n-Furter’s spice and Columbia’s electricity. Along with acting, the actors created true art with the music and choreography of the film, leaving me in complete awe and teary-eyes. From their personalities to the music, each and every aspect of “The Rocky Horror Picture Show” was an iridescent and rumbling time warp.

Considering the fact that most actors in the show are not professionals, each act was an incredible work of art that I hope to replicate some day. As a glam-rock twist on “Frankenstein, ” each scene basked in the glory of true ‘70s music and glittered music onto the mundane classic novel.

Because of my diehard love for the original film, viewing it in person could be considered the closest to an “out of body experience, ” as I was no longer a viewer, but a character in the act- a mad scientist, a hero, a heroine and even a groupie. Seeing “The Rocky Horror Picture Show” in the flesh is the ultimate highlight of my year due to the cast’s manifestation of the original aura of the show, along with the welcoming and friendly atmosphere that has left my heart wanting to sit in the theater’s seats again.