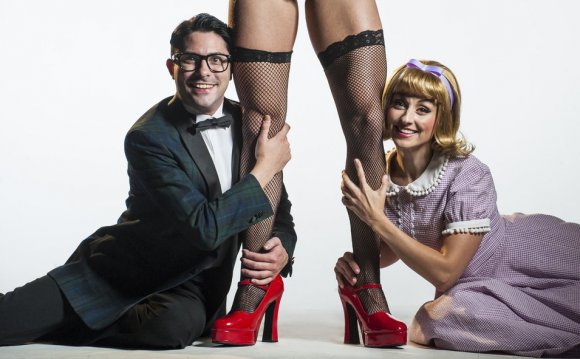 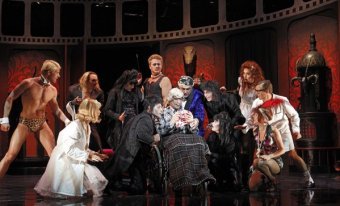 The Rocky Horror Show boasts many spurious distinctions but one it can consistently claim over the last forty-two years is a noteworthy ability to drive a censorious wedge between the critic and the audience. This ability to call forth loathing in critics and deep passionate love in the audience is an unexpected insight, possible only because of the unrelenting longevity of the play and its much-loved off-shoot, the Rocky Horror Picture Show (1975, two years after the musical) and its ability to get into a place inside us that is concurrently deep and shallow. The mixed messages of the play are typically seventies – give your self over to absolute pleasure and be murdered for societies protection; embrace the evil that lurks between your legs and gain remarkable political insights; free your mind and your body will follow and all that – and the musical teeters precariously on those fine opposites of lasciviousness/prudery, kitsch/bad, cheap chic/low-budget and an underground aesthetic/pop. The critics seem only capable of tapping into the negative interpretations while, equally as fervent, the audience seems only capable of engaging with the positive.

This gives The Rocky Horror Show a unique place in musical history. It’s more than B-grade, more than midnight screening, more than counter cultural schlock appropriated into a banal mainstream. It has become a whole that is larger than its combined parts, and one of the few cultural phenomenons that almost every Westerner has a coming of age experience with; either loving or loathing, as these days as it is fashionable to dislike Rocky Horror (but you can bet that wheel will turn in its favour again). What separates it from other B-grade fashionable anti-good vehicles completely separates it such that one is left with aesthetic extremes. What makes Rocky Horror good is better than you will find anywhere, and what makes it bad almost eclipses what is good. The film gave us one of the undeniably greatest performances by a male in film with Tim Curry’s Frank N Furter becoming an unforgettable icon, a role that achieved the impossible – explained the sexual appeal of drag to heteronormative audiences to the extent that the man could arouse a team of footballers (which may not be as difficult as I’m implying). But, as anyone who has played Frank will tell you, and the current manifestation is Craig McLachlan and you can see him interviewed below explaining this, it is the role that gets into you. Frank is one of the best characters ever written, and a fair contender for the most fun to play of all the on stage musicals. 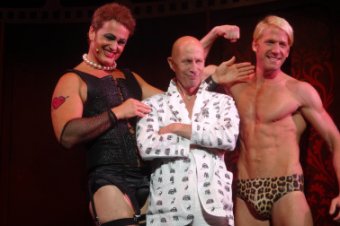 Then the music is its own enigmatic bag of contradictions. Lyrically is it both superb (The darkness must go down the river of nights dreaming, Flow morphia slow, let the sun and light come streaming Into my life) and banal to the point of horribly clunky (Here’s a ring to prove that I’m no joker, There’s three ways that love can grow, That’s good, bad or mediocre). Tracks like ‘Time Warp’ and ‘Sweet Transvestite’ have a perverted sense of genius while tracks like ‘The Sword of Damocles’ make absolutely no cohesive sense to the narrative and if it weren’t for the sha-la-la’s tacked on at the end would be one of the ones we skip through to get to the good stuff. The music can inspire greatness in us (Tim Curry/iOTA/Craig McLachlan) and they can turn us into the worst sort of social dead-shit: think ‘Time Warp’ at weddings. Costume wise it was an important precursor to punk fashion and, the cult world of B-grade worship owes almost everything to Rocky Horror. Yet nothing induces eye rolling like the individual trying to get us all dressed in sequins and torn fishnets to a 7.30pm live show.

And so here we are in 2015, both blessed and subjected to a revival of the early nineties manifestation of The Rocky Horror Show starring Craig McLachlan who won a Helpman award for the role of Frank N Furter the first time around. He’s a great Frank, holding his own well against the always towering shadow of Tim Curry and the new dominance of iOTA, and of all the shows that can stand under the weight of being nothing more than a nostalgia piece, then surely this play is it. McLachlan is getting on now, slinking his satin drapped ass into his fifties, so it’s a great way to kiss off one’s youth and embrace the peculiar sagging of age for a sixties baby. With Bert Newton as a kind of dithering narrator (the man’s seventy-six for Chrissake) who is not a hundred percent sure how he got here, the night is a perfect Rocky Horror night – that is a peculiar mix of subversion and pedestrianism wrapped up in a nostalgia for things we’d prefer to forget.

If there is one thing The Rocky Horror Show can do, it’s deliver, and this 2014/5 version does in spades. It can deliver like a streamlined McDonalds hamburger (Ronald McDonald was also born in the late 60’s). And like McDonalds, The Rocky Horror Show may not be the best meal for you, it may be the thing the foodies tell you not to eat, but every now and then, in the dark of a drunken King Cross night, you just might long for a Big Mac and when you come under the enthrall of those bright lights, you get precisely what you wanted and asked for – whatever that is.

Rocky Horror Picture Show LIVE! At the Belcourt Theatre in ...