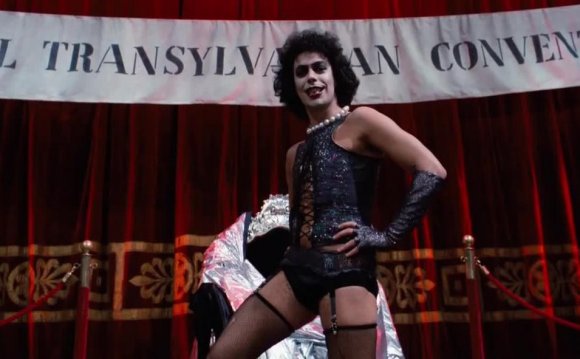 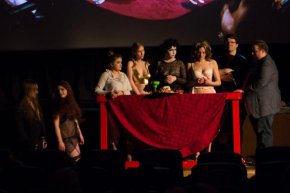 Transvestite Soup is the shadow cast for the Rocky Horror Picture Show (RHPS) in the Twin Cities and Metro Area of Minneapolis and St. Paul, MN.

We perform at the Uptown Theatre in Minneapolis, MN, typically on the last Saturday night of every month.

Transvestite Soup is entirely volunteer and we do not get paid to perform. Tips are always appreciated to help us pay for maintaining and improving our props and the quality of our show!

History of Rocky Horror in the Twin Cities

The Rocky Horror Picture Show has been in the Twin Cities since the late 1970’s. RHPS has been shown with and without casts at:

Before Transvestite Soup there was a number of other casts that performed at the Uptown and Heights theaters. Naming shadow casts was not a common practice in the early stages of Rocky. We are looking for more information from this time in our history!

This history here is foggy please help us if you know what happened here. From an unknown start date until 1995 or early 1996 the movie was shown at the Uptown Theatre. The shadow cast was named “The Midnight Hour.” When the screen came down the Uptown toyed around with the idea of cancelling the show entirely due to the high cost of replacing it. Corey Mattoz Shelly Rounsville and Maria Gomez tried to put together another Shadow cast shortly after the expulsion of the Midnight Hour. They added Anthony Butterfield Adam Hines and a few other people into the cast but it was too late the Uptown closed the show. Anthony Butterfield was close family friends with Loren Williams

Midnight Madness (not the same as the cast currently in Chicago by the same name) began performing at the Heights Theater in Columbia Heights. Sometime in 1997 the cast changed it’s name to Transvestite Soup.

When Rocky moved from the Heights to the Riverview the cast crew and fans caravaned the print to the Riverview. Why you ask? Because WE HAD MONO! Our print was a very limited copy of the movie with mono sound and he Superheroes ending. At one point it was rumored that only six of these prints existed. If the print went back to the movie house we would have lost it.

Transvestite Soup began performing at the Riverview Theater in late 1998. When shows were every Saturday night.

Thanks to Loren’s (Riverview Theatre owner) dedication to Rocky the Riverview brought Transvestite Soup back to show on the 1st 3rd and 5th Saturdays of every month. Our final performance at the Riverview was on April 5 2008. This performance was almost a sellout with over 600 people in attendance. Loren presented Rockymom with a gift of one of the theater’s front row seats.

Transvestite Soup was homeless for a period until the Mounds Theater in St. Paul picked us up and we performed there from June 2008 through Halloween 2008.

We went a year homeless again until our original Twin Cities home the Uptown Theatre in Minneapolis brought us back. Our first shows were Halloween weekend in 2009. We currently perform on the last Saturday of every month.

The End of an Era:

On November 27 2010 our beloved cast Mom Rockymom attended her last show with us. She has traveled out of the country to be with her love. We had over 300 people in attendance including former cast and crew. Mom has been with us since the first show at the Heights theater. We wish Mom luck

The Uptown Theatre continues to host Transvestite Soup on the last Saturday of every month. See our Calendar on the homepage for a list of shows.

In January 2012 the Uptown began significant renovations. During the renovation period Transvestite Soup moved down the street to the Uptown’s sister the Lagoon Theater.