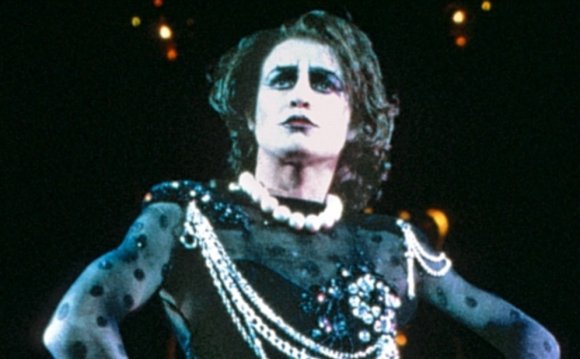 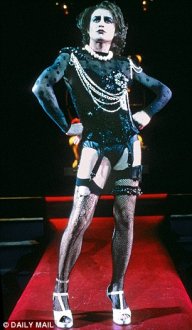 Love: Jason Donovan with his wife Angela Malloch (left) and as Frank-N-Furter in The Rocky Horror Show

No longer was he perceived as the boy next door – which suited him fine. 'I was attracted to the idea of being a bit more dangerous. I was keen to redefine my image. And yes, I loved wearing the high heels.'

There’s another reason why Jason remembers Rocky Horror with affection. Assistant stage manager on the 1998 production was a young woman called Angela Malloch. 'Over the 14-month tour, Ange struck me more and more as an attractive, hard-working person with her feet on the ground.'

Friendship blossomed into romance. Then Angela found out she was pregnant. She told Jason she wouldn’t continue with the relationship – or let him be part of their child’s life – unless he kicked his drug habit.

'We split up for a while, ' he says. 'But eventually we got back together.' Their daughter Jemma, now 13, was born in March 2000. A son, Zac, followed a year later. The couple finally married in 2008 and now have a second daughter, Molly, two. 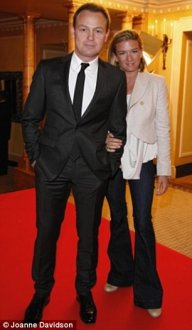 'So, ' says Jason with a huge grin, 'I have The Rocky Horror Show to thank. The weirdo Frank-N-Furter delivered me my sensible, grounded wife.'

The creator of The Rocky Horror Show, Richard O’Brien, 71, couldn’t have foreseen that his creation – a comically camp retread of the Frankenstein story – would still be flourishing 40 years after its first performance at a tiny 63-seat London theatre in 1973.

Original: Tim Curry starred as Frank-N-Furter in the 1973 version of Rocky Horror Show

Since then the show’s been staged all over the world and spawned a cult movie. A 40th anniversary stage production is currently touring the UK.

Tim Curry, 67, the original Frank-N-Furter both on stage and in the film, recalls, 'The film killed my career for a while because producers found it hard to see me as anything other than Frank. But it’s also been my pension so I’m not complaining. It died a death when it was first released though. I saw the first screening and the silence at the end was deafening. But then it started to get screenings on the midnight circuit, and audiences would dress up as their favourite characters.' 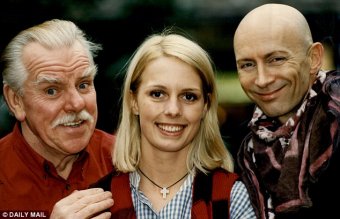 Linking the action together is the Narrator, who has been played on stage by everyone from Nicholas Parsons to Michael Aspel. Russell Grant has also filled the role several times.

'‘I’ve never been in anything like Rocky Horror, ' he says. 'The audience knew the script better than the cast. It’s stayed the course because of the sci-fi vibe, popular with anyone who loves Doctor Who. It’s also slightly shocking – a realisation of people’s fantasies.'

Nicholas Parsons first took the role in 1994 in the West End. 'As everyone else came on for the finale in outrageous costumes, I thought it would be funny to keep the Narrator’s smart crushed-velvet smoking jacket on, but swap his trousers for high heels, stockings and suspenders. It got an amazing reaction. The audience hollered and cheered. Afterwards people didn’t congratulate me on my performance, they said what good legs I had!'

There have been countless Frank-N-Furters, but for Nicholas the most outstanding of them all was Jason Donovan. 'He brought an element of danger to the part. He’s such a gentle fellow offstage but he really let rip in his performance.'