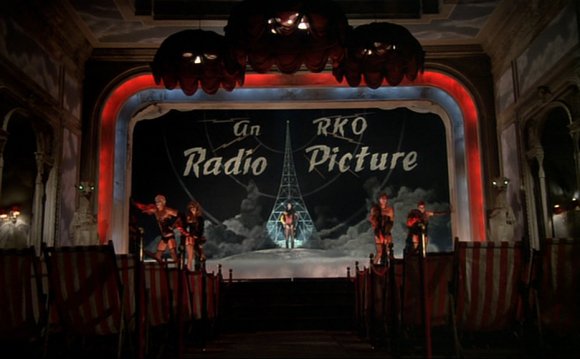 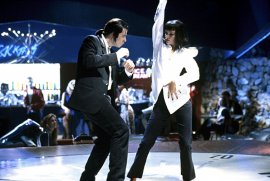 Surf Music and Seventies Soul: The Songs of 'Pulp Fiction' »

"As far I am concerned, [he] is my favorite composer – and when I say 'favorite composer, ' I don't mean 'movie composer, ' that ghetto, I'm talking about Mozart … Beethoven … Schubert, " the effervescent director said while accepting the trophy on Morricone's behalf. "I have to say that I directed the movie … [so] I say thank you, and grazie, grazie."

Tarantino's enthusiasm notwithstanding, the Maestro's contribution to The Hateful Eight is indeed a remarkable, late-career high-water mark. Cold, intense and tumultuous in equal measure, it matches the film's crescendo of violence from its opening overture to the ending number, the single note "La Puntura Della Morte, " or the "sting of death." But what's curious about it is how it almost didn't happen at all.

The filmmaker only began using original music in his movies with Django, though his admiration for Morricone is evident in the way he used old pieces of the Maestro's scores in all of his films beginning with Kill Bill. Morricone, who scored what Tarantino has described as the "greatest achievement in the history of cinema" (1966's The Good, the Bad and the Ugly). But when Tarantino first approached Morricone, the composer rebuffed him. "I had no time, " he remembers saying. "It was the same when Tarantino asked me to write music for [2009's] Inglourious Basterds."

It seems that Cinema Paradiso filmmaker Giuseppe Tornatore had just booked the maestro for his upcoming movie La Corrispondenza. (Tornatore is also making a Morricone documentary, Lo Sguardo Della Musica.) "Then Mr. Tarantino came to Rome [last June] to receive the David di Donatello Award, which is a very important Italian award for filmmakers, " the composer says. "He'd sent me the script and then he came to my house. I read the script together with my wife and thought it was a wonderful story. We spent half an hour together, and it convinced me that I could do it."

What interested him was the strength of Tarantino's script. "It starts quite simply: we see some people on a stagecoach and the meet, almost by chance, " he says. Morricone is at home in Rome and speaks via an interpreter who, like everyone, calls him Maestro. "There is a woman who is going to be hanged when they get to the city they're headed to, and it ends with the reading of a letter by Abraham Lincoln. All these elements impressed me.

"But what also impressed me was the violence, " he continues. "From the script, I could tell there were extremely brutal sequences but they were necessary in order to show that Tarantino himself was truly on the side of the victims."

While they were together, Morricone dreamt up the theme for the film's opening stagecoach ride. Pleased, Tarantino said the film had finished production and he would want the music within a month. And though he was initially hesitant, as Tarantino recalled in a Q&A following the film (as reported by Variety), Morricone realized he had a couple of weeks before Tornatore would send him his film. So, with some of the music he'd written for John Carpenter's 1982 sci-fi–horror masterpiece The Thing, the composer could tender the score.

The incorporation of unused music from the Carpenter film made sense since, in a way, The Hateful Eight could be a descendant of The Thing, with its wintry setting, suspicious rogues, gallons of blood and star Kurt Russell. In the case of the 1982 movie, filmmaker John Carpenter had decided that for once he would not write the music for one of his movies by himself, as he'd done with hits like Halloween and Escape From New York; instead hired one of his heroes. "He's fabulous and just genius, " Carpenter told Rolling Stone of the collaboration in 2014. Throbbing, eerie and as chilling as the movie's Antarctic climes, the soundtrack evokes the paranoia and uncertainty that Russell's character felt throughout the picture.

"Tarantino considers this film a Western; for me, this is not a Western. I wanted to do something that was totally different from any Western music I had composed in the past."

"The collaboration with Carpenter was really something extraordinary and something very peculiar, as well, " Morricone says. "He came to Rome to show me the movie but immediately after the end of the screening, he had to rush away, so I couldn't speak to him. I was very impressed by what I'd seen but I was concerned, because he didn't give me any clue or indication about what he wanted."