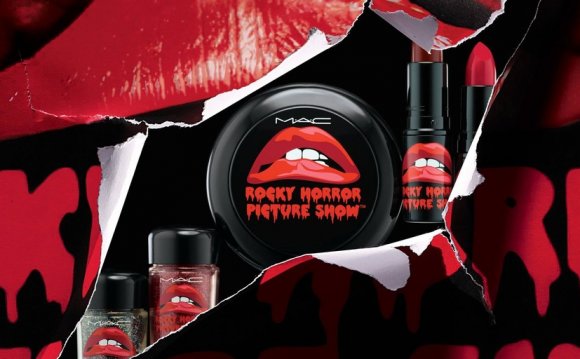 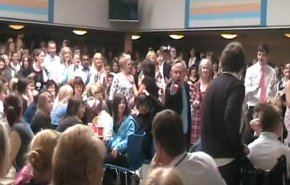 At first it looks as though someone has started the music as a prank and an angry Rector is seen wandering around the room... that is until his feet are taken by the beat

The clip, lasting three minutes and 19 seconds and entitled Bell Baxter High School Leavers ’11 Flashmob, starts with a stern-looking Mr Black patrolling the dining hall. Then the Village People hit YMCA starts playing, and he breaks in to its well-known dance routine.

An increasing number of staff then join in the rehearsed steps as the medley moves into Macarena, by Los del Rio, Michael Jackson’s Thriller and The Time Warp, from The Rocky Horror Show.

The apparently unexpected performance goes down a storm, with hundreds watching and a number of pupils joining in with the actions – to rapturous applause and whooping from the young audience in the crowded room. The entertainment was staged during a ‘flashmob’ in the school’s packed canteen as pupils broke off from the lessons for exams.

Subsequent comments on YouTube about the performance describe the flashdancing rector as a ‘legend’. One says: ‘Mr Black you’re awesome!’ A surprised pupil at the school wrote: ‘Mr Black CAN dance!!! Go Mr Black hahahaha xx.’ Another says: ‘I loved every second. Great show from pupils and staff.’

Meanwhile an older spectator who watched the footage remarked: ‘Schooling has certainly changed since I was a lad.’ Mr Black is not the only member of staff coming in for praise – one fan declares on the website: ‘Mrs Livingstone lol, Legend.’

Mr Black, 54, said he and his fellow teachers who took part in the dance routine had become school celebrities after the clip was posted on the web.

He said: ‘It’s been a very different Monday, after this dance went on YouTube. I’ve never danced before but it was great fun. There were 600 people in the dining hall and now everybody’s going online to see the video. It’s great for the school.’

Mr Black, a former PE teacher, said the dance – at lunchtime on Thursday – was a gift to this year’s school leavers, before they went on study leave on Friday ahead of their forthcoming exams. He said: ‘We are one of Scotland’s biggest schools, with 1, 800 pupils, and we like to foster positive relationships with them.

Mr Black said he and his fellow teachers who took part in the dance routine had become school celebrities after the clip was posted on the web.