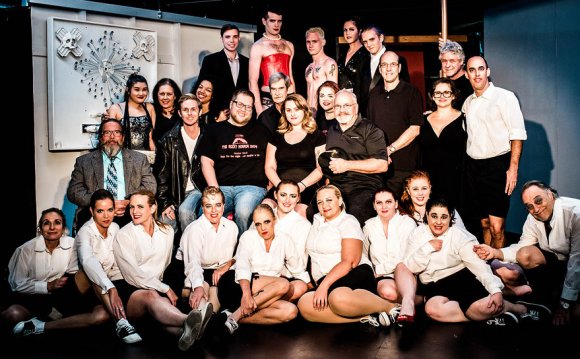 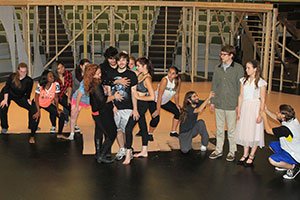 Meet the department:
The CCRI Department of Marketing and Communications is the hub for all internal and external college communications. If you have news you want people to know about, let us know!

The CCRI Players will open the season with "The Rocky Horror Show" starting Oct. 23 in Warwick.

During a recent rehearsal, Associate Professor Ted Clement was bouncing around in the Bobby Hackett Theater, explaining his vision for blocking to the cast of the upcoming CCRI Players musical, "The Rocky Horror Show." Antonio DiPrete, playing Dr. Frank N. Furter, stood in front, his hip jutting out, trying his best to be comfortable. DiPrete was dressed for a pickup basketball game, but with stiletto heels.

"It really should be drag-queen style, " said choreographer Danny Swain to another actor, taking his seat before the group did a run-through of blocking, with some rough song and dance, to the number "Eddie's Teddy." The cast sha-la-las its way around a 1950s revival-ish tribute to the titular character, a troubled punk biker. It was early in the rehearsal process, and much work – drag and otherwise – was still to be done.

The show, written by Richard O'Brien, follows two wide-eyed teens as they descend into the madness of Furter, a sassy scientist with a penchant for transvestitism. The college's take on it, directed by Clement, runs in six performances starting Oct. 23.

Fans may know – but most may not – that the musical "The Rocky Horror Show" actually preceded the critical flop turned cult classic "The Rocky Horror Picture Show." Most fans no doubt have fond memories of seeing a "shadow casted" performance at a late showing; actors in ghoulish costumes would perform parts of the movie in front of the screen with audience participation, the commentary mostly in the "fresh and irreverent" vein, said Clement.

Like many Rhode Islanders, Clement can reminisce about taking in the phenomena at the Meadowbrook Cinema, a movie theater in Warwick, for the first time when he was about 15.

"It was an incredibly fun and wild and incredibly silly experience. I just fell in love with it, " he recalled. "For the next several years, I and a number of my friends would, every Saturday night, go to Meadowbrook, stuff our cars full of young kids and throw rice and shoot squirt guns." 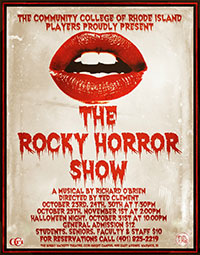 Despite the distinctly grown-up feel of the endeavor, Clement observed wryly that it was one of the safer activities a youngster could get himself into on a Saturday night. "Instead of getting into trouble, me and my friends were going to dance in a movie theater, " he said.

Everyone in Clement's circle has a memory from Meadowbrook; staying out late, donning fishnets and slinky Lycra tops, taking in the show. Meadowbrook is no more, but the troupe that originally presented the "Rocky Horror" shadow casting there, the RKO Army, still performs widely around the state and region. In addition to "Rocky Horror" engagements at theaters, Clement said, the group often will perform at Rhode Island Comicon, the pu pu platter of fandom.

Like so many things in our small state, there's a bit of interconnectedness that makes the college's mounting of this particular production interesting. Many CCRI alumni have been part of the RKO Army and vice versa, said Clement. This year's cast has an active RKO member: Jeana Garcia of North Providence, who plays the role of Eddie in the college's production (played by Meatloaf in the movie). She read "The Perks of Being a Wallflower, " a popular bildungsroman where the main character attends a "Rocky Horror" showing. "It gives him a feeling of belonging, like he's welcome somewhere, " she said.

So when a fellow Performing Arts Department major at CCRI tracked down a performance in Lincoln and offered to bring her, she jumped at the chance. Like it was for Clement, it was love at first sight. "I kept going back to every show I could find, " she said. "We'd go to Foxborough, we'd go to Cape Cod, we'd go anywhere. We'd have such a great time being part of this amazing familial community."

It wasn't long until Garcia officially joined the RKO family, after they recognized her as a repeat customer; she since has had a handful of roles in "Rocky Horror" as well as other cult musicals such as its sequel "Shock Treatment, " "Dr. Horrible's Singalong Blog" and an episode of "Buffy the Vampire Slayer." The troupe doesn't get paid for the time it puts into performing, but for "Rocky Horror" fans, it's clearly always been about the love.

"I've had experiences with this show and this movie that mean the world to me, " she said. "And with the show at CCRI, I get an opportunity to put my own spin on a character I've loved, rather than just acting out the movie. It's really special."