The beloved cult film debuted forty years ago this year, but throngs of teenage kids and young twenty somethings still line up for the movie every Saturday at midnight all over the world. The movie musical, which bombed upon first release (despite the massive success of the stage play) has become not only a movie going ritual for every kid who feels slightly left-of-center, but also a haven of sorts, and a place to meet other young p[eople who are just like them. You could say that RHPS has helped thousands of people all over the world find their inner freak flag and then let if fly. It’s so much more than just a movie.

And yet, that’s exactly how it started out for its young cast, just a movie, a lucrative gig that they’d do and then move on from. Little did any of them know the movie’s legacy would follow them around forever, even those actors who went on to successful careers like Susan Sarandon and Tim Curry. Now as part of the movie’s fortieth anniversary celebration, has brought together much of the principal cast for a reunion, including Sarandon and Curry, who played Janet Weiss and Dr. Frank N. Furter respectively, Barry Bostwick (Brad Majors), Patricia Quinn (Magenta), and Meatloaf (Eddie.) You can see EW’s portrait of the reunited cast below: 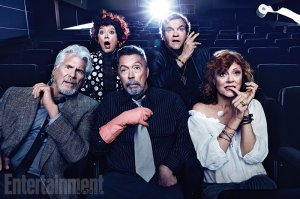 For three of the reunited cast members of the movie, Curry, Quinn and Meatloaf, they actually started playing their characters in the stage play, which was a smash, and which rock music legends were attending on a regular basis. “I remember Mick ­Jagger came to see us, as did a lot of others, ” Patricia Quinn told EW. According to Meatloaf, “We went to meet Elvis, who had seen the show, and he said to me, ‘I hear everyone that has done [Eddie] has only done an impersonation of me and you didn’t do that.’ And I went, ‘No, there’s only one you.’” Tim Curry was hoping it was going to be “a very commercial Warhol movie, ” and in the end, it kind of turned into the most commercial Warhol movie of all time.

Once the movie became the midnight ritual it is now, Susan Sarandon was taken to one of the shadow cast screenings in New York to see it for herself, by none other than a future ’80s teen idol. “Molly Ringwald took me to a screening pretty early on. That was the first time I saw it; I believe it was 8th Street, the whole ritual.” And it’s a ritual that continues to this very day, with no end in sight.