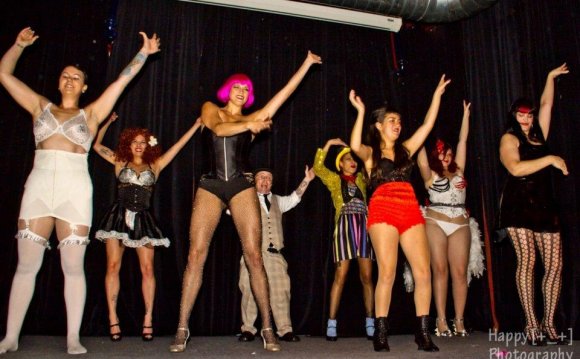 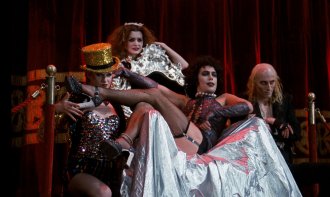 It’s Halloween, and, 40 years ago, a film arrived that’s become the very epitome of the holiday’s theatrical, anarchic, slightly silly spirit. A film full of costumes, roleplaying, monsters, monster-makers, and lots of risqué shenanigans that participants recall both fondly and with no small tinge of embarrassment the morning after. Oh, and musical numbers, and big, red, juicy lips. Lots of lips.

That, of course, is “The Rocky Horror Picture Show, ” the 1975 cult film whose initial theatrical release would have sunk into obscurity if not for the fact that it became one of the first “midnight movies.” Looking to recoup some cash, producers booked the campy monster movie musical pastiche into small houses like The Waverly Theatre in NYC, where it gained a fanatical following of enthusiasts who dressed as film’s characters, sang the songs, and developed an audience participation routine where people riffed on the movie in affectionate mockery. When it rains in the film, people shot squirt guns, when someone proposes a toast, people threw pieces of toast. I’ve been to a screening just once, where, for example, the sight of two guys standing at one corner of the screen chanting “God is dead!” proved a puzzlement before onscreen lighting struck their exact position and they screamed and fell to the ground. Comedy gold.

After running for decades in some theaters, “Rocky Horror” was finally released on home video in 1990, where, cut loose from the giddy, infectious group experience, “Rocky Horror” was revealed to be the scattershot, if energetic, transplanted stage show it always was. Luckily, while the decades-long midnight showings are gone, Cinemagic is resurrecting the experience on Halloween with a 10 p.m. screening at their Westbrook and Saco theaters in Maine (and theaters in NH and MA). And while the days when the late Movies On Exchange Street used to have a dedicated live performance troupe (where, according to attendees, people could throw around anything they wanted) are long gone, at least the chain theater offers “Rocky Horror” fanatics, old and new, a chance to break out their sequins, lace, and bustiers for the evening. A spokesperson for Cinemagic says, “we don’t allow things like squirt guns or rice, but things like newspapers and toast are totally fine, ” and, while there’s no live act scheduled, “Rocky Horror” fans, it’s assumed, will pick up the slack.

“Rocky Horror” is a unique milestone in film history, its affectionate riffing a precursor to the “Mystery Science Theater 3000” model of making your own fun when the movie at hand isn’t up to the job. Yet, the film, with its gleeful flouting of sexual taboos and gender roles struck a chord of sincere liberation with LGBT people of all stripes, especially in the form of Tim Curry’s buff, cross-dressing Dr. Frank N. Furter – one of the first sympathetic (and unashamedly sexy) transvestites in movie history. And the enduringly infectious number “The Time Warp” is the sort of cinematic sequence that remains irresistible when seen, as “Rocky Horror” should be, with a Halloween crowd.

Friday: “Everything Is Terrible! Legends.” It might not be a horror film in the traditional sense, but this collection of clips from the most insane, weird, and unintentionally hilarious snippets from the wild, low rent world of VHS will cast you out of SPACE Gallery dazed and confused.

Did you miss the grand “Damnationland” opening? Well, don’t fret – you can still get the pants scared right off your butt with another screening of this year’s stellar anthology of Maine-made horror movies. For info (and more screenings) check out damnationland.com