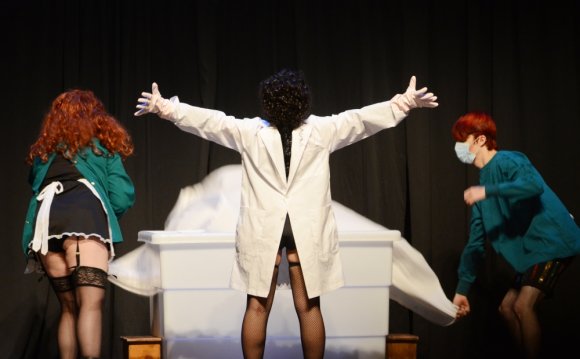 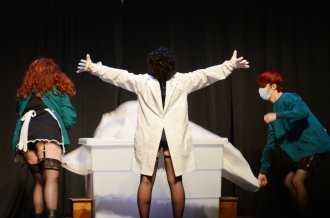 Before she became a choreographer, the Ball State “Rocky Horror Picture Show” director was a “virgin” to the show.

Brianna Bradley, a junior, became choreographer her freshman year after auditioning for Columbia, one of the main characters. She directed her first show Friday evening.

“I got involved through a callout email that was sent out, and ‘Rocky Horror’ was just one of those shows I always said if I had the opportunity that I would definitely try out, ” Bradley said.

Bradley’s cousin introduced her to “The Rocky Horror Picture Show” when she was 16.

“The first time I was ever involved in the shadow cast was also the first time I ever experienced the ‘Rocky Horror Picture Show’ live, ” Bradley said.

Bradley was choreographer her freshman and sophomore year. She said she was also considered the unofficial assistant director her sophomore year, even though she didn’t officially receive the title.

Now as the head director, Bradley is in charge of running all the rehearsals and ensuring there is organization within the cast.

“I am pretty much like president, so I am also in charge of staying in contact with Student Life, as well as keeping our faculty adviser up to date with what is going on, ” Bradley said.

Bradley said that the virgin, or first-time attendee, count for this year was normal for a campus performance, despite the change in location.

“Often times freshmen come to BSU and don’t understand what the show is, but they are curious and come, ” Bradley said. “Most say that they enjoy the show afterward and that continue to come in future years. However, the show is not for everyone, and there are some who don’t enjoy the experience, which is okay too.”

Kayla Irvine, a freshman secondary education major, said she initially heard about the show from her dad, which piqued her curiosity.

“I was very confused about the plot, but I loved seeing it in two different lights at the same time, with the people acting out the scenes while the movie played in the background, ” Irvine said.

The offseason preparations for next year will begin soon. These include constitution changes for the organization, the induction of new officers, as well as discussing an invitation from Wheelhouse Grill to perform at the Centerville restaurant again.

After these preparations are made, the open audition process will begin in April and again in early August.