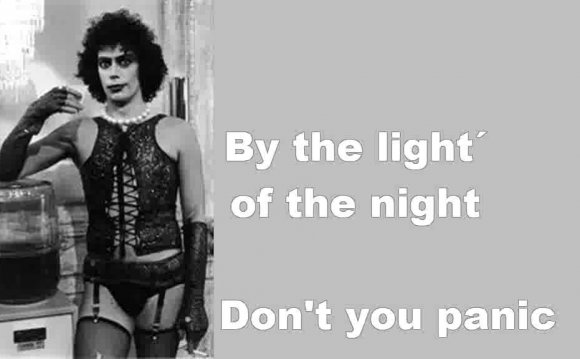 The soundtrack for the Rocky Horror Show episode of Glee is out, and they 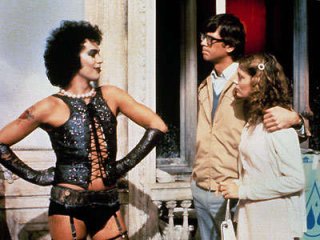 changed a few of the lyrics to clean them up for prime time. Fortunately for them, they didn't attempt the dirtiest songs in the play and most of the sexuality comes from the scripted scenes, not the songs themselves, although they did do a clean version of "Toucha Toucha Touch Me" and made odd changes to "Sweet Transvestite." "Sweet Transvestite" is sung by Mercedes, de-transing and de-gaying it, and the lyrical tweaks make the de-queering more evident.

I should point out that the source I had for the song titles that listed "Dang it, Janet" and "Sweet Trans" was incorrect. It billed itself as a Glee fan site and said that "the track listing has just been officially announced." Sorry about that; the song titles are all the same.

Anyway, in related news, the creator of Glee has been tapped to direct a remake of The Rocky Horror Picture Show. I understand and I love cover songs, but I just don't get what Hollywood has with remaking films that are completely understandable to contemporary audiences. It's not like Susan Sarandon's career is over, much less her language becoming so outdated Americans can't comprehend what she's saying or doing.

You'd also think they wouldn't want a teeny-bopper and not-too-comfortable-with-the-T-folk director who doesn't seem to really understand the original or its success to redo it... what am I saying? Everyone will be more conventionally beautiful, Frank N. Furter will be played by a woman, and they'll all sing with the aide of the autotune. Maybe they'll get Britney Spears to play Columbia!

Lyrics were changed in "Toucha Toucha Touch Me." "Heavy petting" became "heavy sweating, " "seat-wetting" became something I really can't understand (bed-fretting?), "And if anything grows" became "And if anything shows, " and "I need a helping hand" became "I want a friendly man." So, like Rocky's wardrobe, they cleaned it up because The Rocky Horror Show as written isn't PG. Also, Jayma Mays's (who plays Emma Pillsbury) voice is annoying. Has she sung before on the show? This is probably why.

The stranger changes are in "Sweet Transvestite." Glee changed the melody along with the lyrics, and Mercedes shouts it at the top of her lungs. It's 2010 and the "She just belted that out! She can belt! Did you hear her belt? I can't believe that someone can belt!" fad isn't over, so we'll have to wait a few more years to hear mainstream female vocalists perform with any melodic subtlety. The song is supposed to be sarcastic, condescending, and sensual, but who wants that when you can shout like a five-year-old? (Listening to this performance makes me miss Aaliyah so much.)

Now, I don't really get why Glee changed "I'm just a sweet transvestite, from Transsexual, Transylvania" to "I'm just a sweet transvestite, from Sensational, Transylvania." It just seems weird, because if they wanted to take out the word "transsexual" I don't know why they wouldn't take out "transvestite" as well. Maybe that'll be explained in the episode, or maybe someone smarter than me can explain in the comments.

Plus she sings "I'm not much of a girl" instead of "I'm not much of a man, " reinforcing the fact that she's playing the role as a woman girl playing a woman girl, not a man playing a cross-dressing alien/mad scientist/Oscar Wilde-esque intellectual, unless she wears men's clothing, which could be fun to see. But Rocky is played by a man ("I've been making a man with blond hair and a tan" is still there) and I doubt they're going to do the scene where Frank N. Furter sleeps with Janet or the other where it's mentioned that he slept with Columbia, so they made Frank N. Furter heterosexual.

Actually, it makes sense that Mercedes sings "girl" instead of "woman" - the whole soundtrack is the children's version of Rocky Horror. But when the original is about maturity, about a certain kind of sexual honesty and free transgression coming into contact with the families and communities of origin the queer audience would have been all too familiar with, it seems inappropriate.

In one episode of Top Chef last season Amanda made sherry-braised chicken in the middle school cafeteria competition, defending her choice arguing that she likes sherry and chicken so she thought she'd make that for the kids. Gail (a judge) responded that she likes vodka too, but.

To be fair, Glee does an excellent job with "Damn it Janet." Considering how the song is making fun of the po-dunk folks who came from Denton High, the real villains of the play/movie, I guess it makes sense that Glee would understand that song.