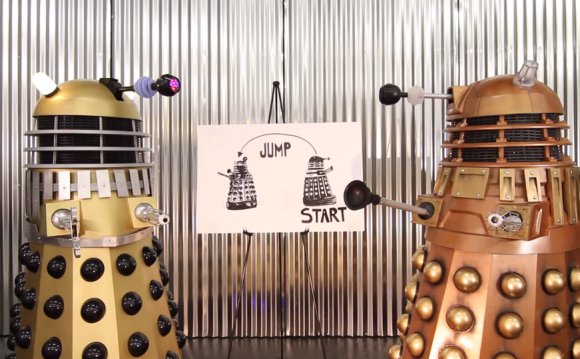 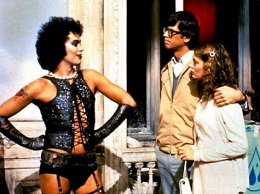 It’s all haunted mansions and secret labs, corsets and glitter, sex and the destruction of (arguably pretty boring) innocence—but what are you supposed to get out of The Rocky Horror Picture Show besides a really good time? The midnight showings are legend, the Time Warp is played at practically every prom and wedding you go to, yet it’s hard to find the meaning of this musical outside of outrageousness for outrageousness’ sake. Plus an homage to 50s rock and old science fiction cinema. The first time I watched it as a teenager (at the behest of a more mature friend, isn’t that always the way?) my reaction boiled down to “…hablahlawhut?”

But taken in context with when it was originally produced, the themes of Rocky Horror begin to coalesce. The first stage show production was in 1973, with the film released two years later, toward the tail end of the glam rock movement. And Doctor Frank-N-Furter’s journey heavily mirrors the politics and taboos explored during those years.

Take Frank-N-Furter on his own: he is an all-singing, all-vamping, bisexual transvestite from another planet. He is trying to create the perfect man for himself, a man mainly conceived as the ultimate eye candy. He laughs off the wide-eyed Brad and Janet, enjoying their squirmish induction into his cadre of all-night partying Transylvanians. This persona borrows heavily from David Bowie’s creation of Ziggy Stardust, a rock and roll god sent from another planet to bring us music from the stars. 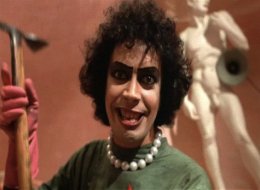 Bowie claimed to be bisexual early in that decade, and this element was folded into the Ziggy mythos with songs that contained telling imagery or outright spoke the message, such as “Width of a Circle” and “John, I’m Only Dancing.” Though the Ziggy figure was fond of jumpsuits, 1970-71 saw Bowie in long dresses with tresses down past his shoulder blades, so having Frank in a corset and stockings is not much of a logic leap. Though the glam rock movement was popular and fierce while it lasted, it wasn’t long before it went out of fashion, the eyeliner and androgyny traded for safety pins and slam dancing as punk emerged a few years later.

It gives Rocky Horror a layer of allegory that isn’t necessarily prevalent on the first viewing. It’s easy to spot the shout outs to Golden Age sci-fi and monster flicks (Frank’s insistence that he wants to be dressed like Fay Wray, the heroine of King Kong, also mentioned in the opening number “Science Fiction Double Feature”), it’s easy to hear the 50s pop musical influences in the soundtrack, but the idea that real-world cultural thoughts are actually being explored in this romp seems completely at odds with the tone of the whole experience. Of course, if we take a closer peek….

After Rocky’s creation, the audience is introduced to Eddie, a former lover of both Frank and Columbia, who has had half of his brain cut out in sacrifice to the doctor’s new Charles Atlas. Eddie’s song “Hot Patootie — Bless My Soul” harkens back to the beginning of rock’n’roll, sock hops and greased hair and poodle skirts in abundance. Eddie’s nostalgia makes him seem innocent, a sweet soul caught in his long-abandoned era, and that innocence is given over to Rocky via transplant, humanizing what could have been just a very well-toned monster.

Then Dr. Frank takes up an axe and hunts Eddie down in front of the house guests.

In case that wasn’t clear: alien science cut up milkshakes and burgers, proud sexual exploration laid waste to fumblings in the back of cars, and glam just flat-out murdered good ol’ fashioned rock’n’roll.

The creation of Rocky is a perfect metaphor for what glam was all about; the sincerity of rock at its inception—provided or, perhaps you might say, stolen from Eddie—combined with an admiration for youthful human beauty and a preoccupation with sexual desire. As Frank says to Rocky after Eddie is dead, “Don’t be upset. It was a mercy killing! He had a certain naive charm, but no… muscle.” Without that muscle, glam doesn’t play. It was about the music, yes, but about physical expressions of identity just as much.