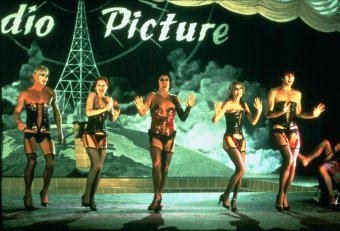 Brad may be in love with Janet, but the fans of the original film are not very fond of Fox’s plans. The Rocky Horror Picture Show was released in 1975 and over the years turned into a cult movie, with live shows playing regularly in movie theaters all over the US. These events could be described as “interactive” and “immersive”, with people shouting witty comments at the screen, throwing confetti and, of course, doing the Time Warp.

For the film’s 40 year anniversary, Fox decided to produce a two-hour TV reboot of Janet and Brad’s crazy story., it will be choreographed and directed by none other than, who was also the director of everyone’s favorite movie trilogy.

Naturally, audiences have their doubts about the project. Much of the charm of The Rocky Horror Picture Show is its cast, which has become an iconic group and a vital element of the movie. Choosing new actors for these roles will be a tricky business for Fox. As expected, Tumblr and the internet world didn’t miss a moment. Dream cast lists started popping out everywhere and even though imagining other actors playing the characters of the film seems almost blasphemous, there are some pretty good ideas floating around the web.

Dr. Frank-N-Furter is possibly the hardest role to re-cast. Tim Curry as the “sweet transvestite” character has become a cult figure himself and every other actor appears to fall short. One list created by a user on Tumblr quite unexpectedly suggested Jimmy Fallon and even though he seems like an actor that could pull off the personality of the Doctor, it looks as if Russel Brand would be a more appropriate choice. He is a skilled comedian and he frankly has just the right facial characteristics.

One of the pairs that might be able to pull off the roles of Brad and Janet was Ryan Reynolds with, proposed in a list on Moviepilot. Reynolds can easily match the geeky look of the character originally portrayed by and Seyfried, with her big eyes that bring back memories of Susan Sarandon’s side glances in the original film, has proven that she can be as adorable as she can be sexy. As far as the ripped but not very intelligent Rocky goes, it seems like is a popular choice but Zac Efron or Chord Overstreet seem to be more fitting candidates.

Reactions to the reboot are bound to vary. The older audiences might be displeased but this is an opportunity for The Rocky Horror Picture Show to reach new, younger audiences. Fans of the movie however can find solace in the fact that Lou Adler, one of the original producers will co-produce the TV reboot., producer of is also on board for this project and Fox plans to stick to the original script. This means audiences will still be able to shout their favorite lines at the screen and sing along to the Time Warp.