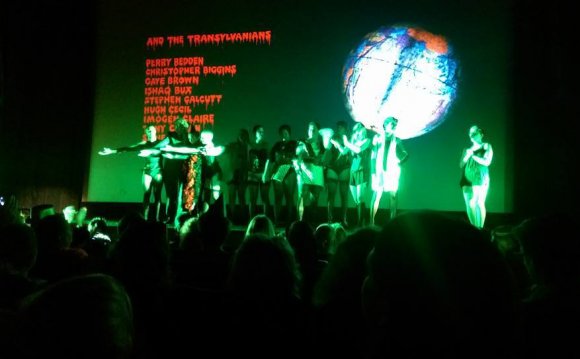 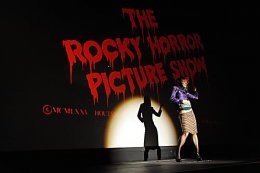 On the Friday before Halloween, as the annual Frenchmen Street revelry commences and as crowds vacate New Orleans City Park after the Voodoo Experience, a different kind of tradition begins outside the Prytania Theater. It's an hour before a midnight screening of The Rocky Horror Picture Show, which the theater hosts on a regular basis as part of its midnight movies series. The space outside the theater is empty aside from a few scattered people, but soon a line stretches down Prytania Street almost to Jefferson Avenue.

The crowd is eclectic — there's everyone from diehards in costumes, to the kind of movie nerds that usually populate midnight movie screenings, to a pair of pretty blonde women (drinking Champagne from the bottle) who ask me to snap an iPhone photo of them. There's a group of friends, all transplants who were active in their hometown's Rocky Horror scenes, who attend every Prytania screening. Some in the crowd are noticeably young, like a trio of teens I encounter, one of whom boasts about her recent expulsion from a local Catholic high school. The teens, who range in age between 14 and 16, all discovered the nearly 40-year-old movie through older family members and were intrigued by the characters' flamboyance and fluid gender identities.

"Transvestites, singing and glittery people equals awesomeness, " one of the girls tells me.

Waiting becomes more exciting when the night's "shadow cast" — the actors who pantomime the film in front of the screen — begins to work the line. The cast's Dr. Frank-N-Furter, who has the posture, pursed lips and British-inflected coo of Tim Curry down pat, struts down the sidewalk, parts of which are now sprinkled in glitter. The cast members are attractive, social young people with immediately apparent theater-kid streaks, and they interact with the crowd, extracting "virgins" — those who have never seen a live Rocky screening — from the crowd and branding them with a lipstick "V" on their foreheads. ("Seeing it by yourself doesn't count — that's just masturbation!")

The cast also sells $7 audience participation kits that include "everything you need for the show besides loose morals, " according to their sales pitch. Inside the kits are Rocky props suitable for throwing at the appropriate moments: rice, a piece of toast, toilet paper, and playing cards, along with party hats, noisemakers, sheets of newspaper and instructions on how to use it all. Besides the often lewd audience callbacks lobbed at the characters onscreen, formal audience participation also involves several props thrown at appropriate moments: pieces of bread when a character proposes a toast, rice during a wedding scene, playing cards after the lyric "cards for sorrow, cards for pain" and toilet paper during the line "Great Scott!".

The theater opens its doors, and soon the show begins. As part of the "virgin sacrifice" portion that's common at Rocky screenings, some brave, lipstick-branded first-timers get on stage and are asked to participate in a bit of gentle hazing. In this case, the virgins are handed the embarrassing task of performing a convincing fake orgasm to their fathers' names.

Two cast members present the "rules" for the screening — some silly (if you have any illegal substances, give them to the cast), some real (no flash photography) — ending with "what happens at Rocky, stays at Rocky."

Then, as dictated by tradition, the crowd stands up, turns toward the projector while waving their middle fingers and, in unison, shouts "Start this f-ing movie!".

The campy R-rated sci-fi movie-musical — in which a naive, newly engaged couple finds themselves in a mysterious castle occupied by strange inhabitants, a place of experimental science, cannibalism and choreographed dances — opened in theaters in 1975. Ticket sales were poor, but the film soon enjoyed a cult following on the midnight movie circuit. By the late 1970s, midnight screenings of The Rocky Horror Picture Show were a national craze, and the tradition of audience callbacks and participation began to take shape.

The film by no means occupies the counterculture cachet it did during that time, but the Rocky tradition is kept alive by devotees who attend conventions and engage in other expressions of fandom and shadow casts active around the country. In the past, New Orleans had roving groups like the Transylvanian Electric Co., which would perform at movie theaters, bars and other venues. Before that, the now-closed single-screen Sena Mall Theater in Metairie hosted popular Rocky screenings during the height of Rocky mania. In recent years the city has not had an active professional shadow cast. Now the only theater consistently showing Rocky in New Orleans is the Prytania, and a group of Tulane University students has recently assumed the role of its official Rocky cast.

Rocky is a beloved tradition at Tulane, where on Halloween it hosts a wildly popular screening of the film in the school's McAlister Hall, according to student Erin McCluskey, the director of the cast. McCluskey became interested in the event while a member of the school's Office for Gender and Sexual Diversity, which funds LGBT student organizations. When she got involved in the cast that produces the Tulane screenings, it was a smaller, more exclusively LGBT-focused event produced by the school's Queer Student Alliance. Since then, she says, it's become a popular happening for all kinds of students — both for spectators and those who want to play in the cast.