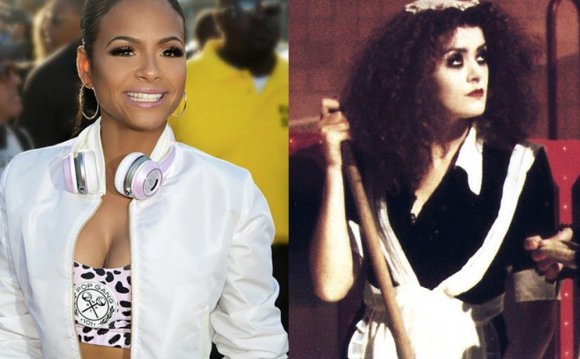 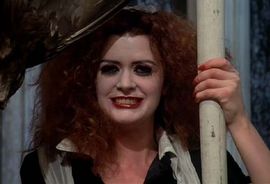 Magenta is said to be in an incestious relationship with her brother, even though Quinn herself was not aware of this. (Pairing: Riffgenta.)

Many questions have been asked about the siblings' surname, and the most common used in fan-fiction is Vitus.

Dr. Frank-N-Furter is hosting a party for the unveiling of his creation, Rocky Horror. A young, newly engaged couple, Brad Majors and Janet Weiss, has their tire pop, so they wander through the rain, finding themselves at Frank's castle. The door is answered by Riff Raff, Magenta's brother. The couple is lead in, and Janet asks if they're having a party, and Riff Raff reveals it is one of the master's affairs. Janet states that he is lucky, and Magenta is revealed, popping up from behind the railing, and sliding down.

The siblings then procede to sing "The Time Warp", with some help from the castle's groupie, Columbia, and some Transylvanians Frank has for the party. Frank then comes down the lift, singing his song, "Sweet Transvestite", and shamelessly invites Brad and Janet up to the lab, to see what's on the slab.

Magenta and Riff Raff go to strip Brad and Janet down to their underclothes, Magenta taking Brad. (Pairing: Bradgenta.) Magenta and Columbia assist Riff Raff while Frank flirts with Brad and Janet. Riff Raff interrupts him, and he unveils Rocky Horror. He sings him a song, which Eddie, the ex-pizza delivery boy, pops out of the freezer, with a scar on his head, where Frank took out half his brain. Frank kills Eddie for stealing his glory, and Magenta takes off Frank's bloody, pink gloves.

Later, while Brad and Janet are in their separate rooms, Riff Raff and Magenta watch them over the moniter, and after the seduction of Janet, let Rocky free, chasing him out with fire.

After they spy on Brad, Magenta goes to Columbia and her room, (Pairing: Magenta/Columbia.) and watch Janet as she sings "Touch-a Touch-a Touch Me" to Rocky Horror. Afterwards, when Dr. Scott is forced up to the lab, they are seen in bed together.

Magenta, Riff Raff, and Frank at dinner, with a very... Appetizing dish in front of them.

Magenta announces, loudly, that dinner is ready, and helps her brother serve the meal. The meal is later revealed to be Eddie, and when the table cloth is pulled off, his decaying corpse is revealed. Magenta laughs so much when everyone runs out of the room, her brother screams at her, and she starts to cry.

After everyone is in the laboratory again, Frank nods to Magenta, and she turns Brad, Dr. Scott, and Janet into statues. Columbia rebels, and Frank turns her into a statue. Posing, Rocky gets turned into a statue too.

Magenta screams at Frank, asking when they will return to Transylvania. He offers her a reward through sex, which she declines. Frank has his floorshow, and Riff and Magenta burst in, in their spacesuits, and declare to Frank his lifestyle's too extreme, and they're going back to their galaxy.

Frank sings a song, "I'm Going Home", until Riff declares that Frank will be staying on earth, in spirit, anyway. Columbia screams, and is shot. Frank realizes it's real, so he, of course, freaks out, and dies. Rocky cries over him, carrying his body up the RKO tower, finally dying, and falling in the pool. Riff tells Brad, Janet and Dr. Scott to get out, having his and Magenta's final confrontation before the castle takes off for Transsexual. (Alternative spelling: Transexual.)