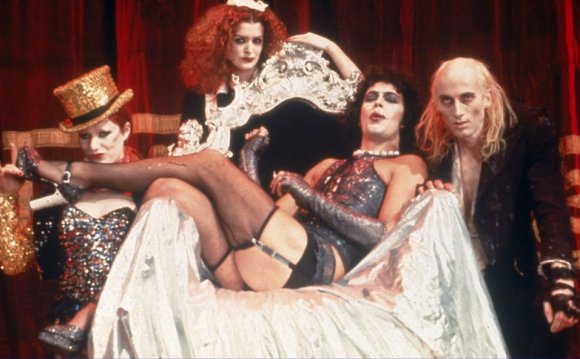 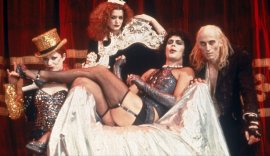 Lili Safon kicks off our new series on cult films with a look at the genre’s most iconic entry. The Rocky Horror Picture Show screens every Friday and Saturday night at Chelsea Cinemas for $9.

In 11th grade, I lost my Rocky Horror Picture Show virginity. Like many “virgins” before me, I was forced to sport a red “V” on my forehead painted on by lipstick. I was aware of all the infamous Rocky Horror traditions, such as throwing toast and taunting the characters, but I had no idea just how extensive the ritual was.

While I have not had a chance to return to a screening of this cult musical, I feel a sense of community any time I see the iconic red lips of the opening number “Science Fiction / Double Feature.” Since its first midnight showing in 1976, The Rocky Horror Picture Show has maintained a faithful cult following. Throughout the years, the community surrounding this film has provided a sense of security for those who don’t quite fit into the classic Dick and Jane relationship. In other words, my Gay-Straight Alliance friends and I were considered the “normal” people there.

The film centers on a naïve couple, Brad and Janet (played by Barry Bostwick and Susan Sarandon), as they break out of their stereotypical relationship and experience a sexual awakening with the help of Dr. Frank-N-Furter (Tim Curry). This “Sweet Transvestite” is conducting an experiment to rival Dr. Frankenstein’s. However, his creation is not necessarily in the name of science; in fact, he is making a man with “blonde hair and a tan” by the name of Rocky. Needless to say, sexual chaos ensues. But nothing onscreen is as shocking as the mayhem within the theater. The raucous audience yells at the screen, calling Brad and Janet “Asshole” and “Slut, ” and dances along to “Time Warp.” The script of jeers and puns has remained ostensibly the same since my own mother went as a teenager. Some locations, such as the one I went to, even have actors who mime the story along with the film. This only adds to the chaotic party atmosphere.

But what has kept Rocky Horror from becoming archaic? While it does have devoted fans, the film itself is not considered fine cinema. In fact, it bombed at the box office when it premiered in 1975. The true heart of the film, its unabashed acceptance of unconventional sexuality, not only won over the original cult audience, but has also kept the following alive for years. As gender roles continue to be negotiated politically and socially, this film offers alternatives for those who want more. Even beyond that, the cult of Rocky Horror has created a world where everyone is accepted, where the abnormal is normal. It is the place where any outsider belongs. As Dr. Frank-N-Furter famously says, “Don’t dream it, be it.” Every audience member is encouraged to be who he or she truly is, whether their identity conforms to the gender stereotypes of everyday life or the less conventional ones found onscreen.