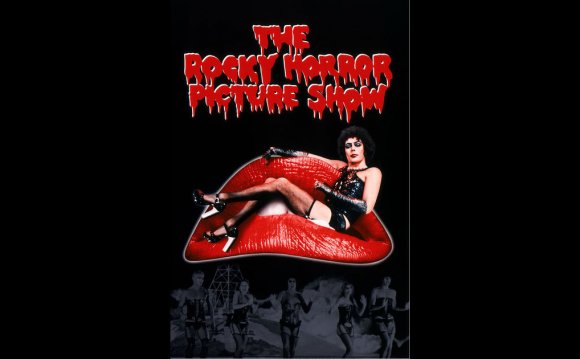 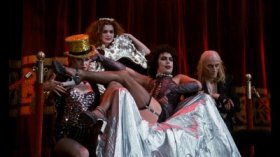 Before we get to the review, I have to explain that I think this 40th anniversary edition might be the exact same disc as the 35th anniversary edition, reviewed by DVD Talk here. The extras are all exactly the same, without any additional extras, and my research shows that the audio/video transfer is the same from the previous Blu-ray edition as well. One release of this 40th anniversary edition comes with goodies like a cool S&M leather jacket-style box, surgical gloves, and the soundtrack on CD. However, if you purchase the single disc edition, be aware that you're more than likely buying the same disc as the previous version, with different artwork. I didn't get the version with the extra physical stuff, so I guess this review works as an alternate take on the review already written by the great Stuart Galbraith IV.

For an exuberant musical that's supposed to be the ultimate social midnight movie experience, isn't it weird that every time I've seen The Rocky Horror Picture Show, I watched it alone in my living room? This not at all planned tradition goes back to the late 90s, when I watched it on VHS while I was in film school. After I bought it on DVD a couple of years later, for some reason I again found myself watching it alone. This might have something to do with my fear that even the geekiest film nerd friends in Turkey might not have found themselves in tune with the musical's giddy weirdness.

Over a decade later, I went from not watching it with friends due to non-exposure to not watching it with my wife due to overexposure. She apparently went to way too many midnight screenings while she was in college, and even though she said that she enjoyed the experience back then, seeing The Rocky Horror Picture Show too many times soured her to the film. So, here I am, one of the rare specimens who saw The Rocky Horror Picture Show multiple times, all of them by myself and without any audience participation. Perhaps it's a testament to the film's enduring entertainment value that I still manage to have a good time with it even though I've never experienced it the "real" way, with audiences yelling and throwing stuff at the screen, while live performers act out the musical numbers as they pop up.

The Rocky Horror Picture Show is "the" cult movie, the one that set the stage for audience participation midnight screenings. Even though these days, midnight movies have the reputation of "so bad it's good" flicks like The Room and, The Rocky Horror Picture Show is a genuinely well-made musical that doesn't really belong in that category. Sure, it's goofy, weird, and exuberant, but those words are not synonymous with incompetence. There's real artistry, performances, and musical talent at work here, albeit used to put together a self-aware bit of silliness that pays homage to 50s B-movies.

The plot doesn't really matter in The Rocky Horror Picture Show, and take a back seat to the colorful musical numbers as the story of a square couple (Susan Sarandon and Barry Bostwick) getting trapped by the beyond eccentric Dr. Frank-N-Furter (Tim Curry) as they eventually take bold new steps regarding their sexuality becomes more and more irreverent, so much so that we get a finale that somehow revolves around aliens with pitchfork lasers. The Rocky Horror Picture Show is one of those rare films where the lack of sense and accountability in the narrative is what makes it so special. It's both very much a product of its time, coming out when sexual liberation in America was reaching its zenith, and timeless in the way that it manages to entertain all ages and generations with its wanton wackiness. That is, as long as you have an open mind and have the ability to "be it" and "don't dream it".

As I mentioned above, this seems to be the same transfer as the 35th anniversary release, and let me tell you, this 1080p presentation is in no need for a remaster. The colors are stunning, the black levels and contrast are near perfect, and the video has a healthy amount of grain while looking as clean and crisp as possible. Another thing I appreciate is that this is a true 1:66:1 transfer. It leaves small black bars on the sides, but at least we get the true aspect ratio.

The DTS-HD 7.1 presentation is a treat to fans of Richard O'Brien's music, as the musical numbers get the optimum amount of depth and surround presence. Cranking up the volume on your surround system will make you feel like you're at a midnight screening.

You can pick between the UK or US versions of the film. The US version omits a song called Superheroes, which, although a bit atonal to the story, is my favorite song in the musical. So you can bet that I always watch the UK version.

Rocky Horror Picture Show - Once in a While HD