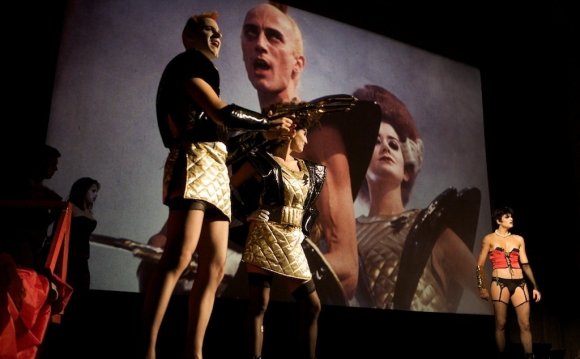 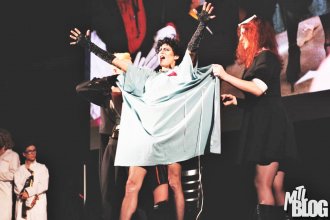 Halloween is the party holiday of the year. Surpassing even New Year’s Eve, Halloween always has the hottest mess of parties to attend, and this year’s Halloweekend will be no different. But I’m here to tell you that no matter where you go or what you do on Halloween, if you’re not going to the Montreal Rocky Horror Picture Show, you’re missing the best event of the year.

Even if you’ve never attended a Rocky Horror spectacle, you probably have some vague idea what it’s all about. Or at least think you do. Off the wall costumes, gender-bending everyone, and a whimsical level of debauchery are the most well-known aspects of Rocky Horror, and all are present at just about any showing.

Those who have actually been to Rocky Horror Montreal understand the event is so much more.

Not simply a cult musical, nor a queer event, nor an excuse for folks to rock out (pun!) in drag, Rocky Horror, and especially the Montreal showcase, embody all that is amazing with Halloween. Hell, Rocky Horror is like a synthesized shot of what’s good in the world, and I don’t think I’m being hyperbolic by saying that. It’s hashtag truth.

I’d like to claim all Rocky events are on the same level of amazing as Montreal’s, but I can’t attest to that, so I’ll go forward with my original claim that Rocky Horror Montreal is the greatest, and let you sub in your city’s name where you see fit.

Last year, like the years before, I donned some fishnets, slapped on some red lipstick, put on some guy-liner, and hit the town towards the Imperial Cinema on Bluery. Along the way, more than a few drunk folks praised my drag-tastic get up, a testament to just how amazing Montreal Halloween culture is, but that’s not the point of this story, I just wanted to illustrate how good I looked. Just look at the cover photo, you know it’s true.

Upon entering the cinema, I was once again taken into a space unlike any other. High octane energy is abound, and blend of positivity intermixed with carnal desires pervades the atmosphere, attacking your senses with a Rocky kind of high.

Literally everyone is instantly sent into a chatty mood, admiring each others sexy get up and in giddy anticipation for the show. The alcohol you can drink at any time during the show definitely helps with all that.

Raw, yet warm and inviting would be the best way to describe the vibe of Rocky Horror Montreal, a mood you won’t get elsewhere. And that’s not even the best part. 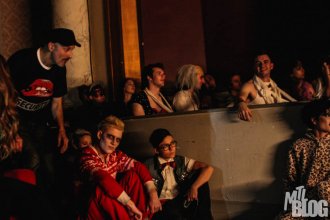 After sitting with my posse of scantily clad ladies, one of my friends noticed that directly next to me sat an officer of the Montreal police force. How my friend knew the woman next to me was a police officer (she was in civilian clothes) is beyond me, but my pal was right, as I discovered later. I guess some people just have a sixth sense for law enforcement.

Me being me, and decently drunk and in total drag, was instantly wary of my law enforcing seat-neighbor. And when my entire group all decided to take a group pee session (as ladies do) before the show began, I was a bit nervous to bit sitting right next to a police officer all by my lonesome.

To occupy myself and circumvent any awkward silence with the officer beside me, I randomly struck up conversation with two young women in front of me. Being Rocky Horror “virgins” (someone who has never attended the show), and since I’m so nice (when I’m buzzed), I gave them a rundown on what to expect and where to sit. The inviting social vibe of Rocky Horror strikes again, even with a sassy betch like me.

But eventually, the two gals left to go find seats, and I was left alone with the SPVM officer to my right, and it was one of the best experiences I’ve ever had at Rocky or elsewhere.

Almost immediately, the police officer (whose name will forever escape me) struck up a convo. Actually, she called me “really cool” for helping out those virgins and actually asking about their lives, but that’s not the point of this story. Do note that someone else think I’m cool, so it’s not just me.

After the ice was broken, we actually got along really well. She confirmed she was a police officer, one who frequently works the overnight shift (Rocky was her pre-shift celebration) and also holds a Masters in sociology, while I told her about my life in general, which was not nearly as interesting as some of the anecdotal tidbits she gave me about her experiences on the Montreal police force.

Eventually, my friends returned, the lights dimmed, and the vibrant spectacle that is Rocky Horror Montreal began. But it was in that short conversation, a rather small moment in the grand scheme of the evening, that was the most memorable.

In the span of moments, a gay guy in fishnets with no real love for the po-po and an experienced law enforcer became fast friends. Unencumbered by any societal restraints of conduct or personas, we were able to connect as human beings, and just be ourselves. Where else would that happen? Well, nowhere.

That is the true beauty of Rocky Horror. While attendees may dress up in outrageous outfits and costumes, the event is really a way in which to be the real you, the daring, sexy, and adventurous side of yourself unseen the rest of the year. You get to be you taken to the next level, without fear of judgement or criticism, because everyone at Rocky Horror is there to simply have fun.