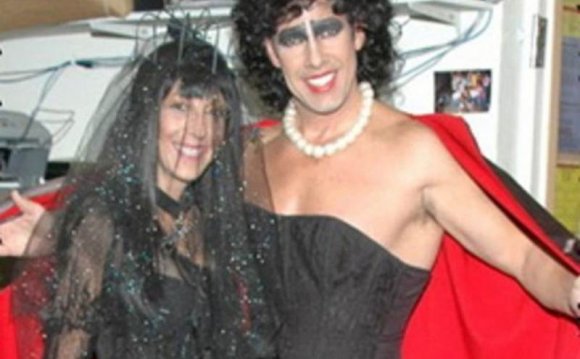 This year's version will include shoutouts to mark the movie's 40th anniversary and the troupe's 20th-anniversary performance, says Jen Ogle, a 22-year "Rocky" veteran who acts and directs the Out of the Shadows troupe.

"I like to be surprised, so I didn't ask details, " says MC Susan Steffee, a fixture at the Tower, who is returning for her 28th year.

"It wouldn't be 'Rocky' season without Susan, " Ogle says.

Ogle says the troupe rehearses together every weekend, while cast members also commit to watching the movie on their own each week. "We absolutely love what we do, " she says in an email interview. "We are all volunteers, and we do it to make people happy and give them a one-of-a-kind experience. Each show that we do has a different feel according to the crowd, and our improv changes, so you don't get the exact same thing every time."

"Rocky, " a tribute and sendup to B horror movies, tells of innocent young couple Brad and Janet, who become lost in the woods and meet Frank N. Furter and his Tranyslvanian minions. The story was a 1973 British musical before it morphed into the cult classic 1975 film.

For longtime fans of the Salt Lake City phenomenon, filmmaker Mario DeAngelis is creating "Living with 'Rocky, ' " which premiered at last month's Salt Lake Comic Con. The documentary should be available online soon.

Jon as Betty in Rocky Horror

Once in a While Rocky Horror Show