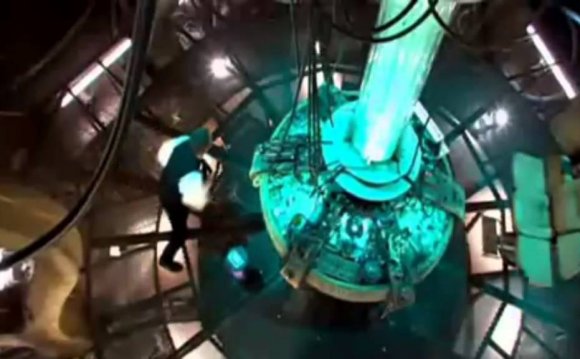 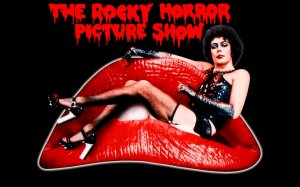 When I was 18, my friends tried to convince me to go to a showing of The Rocky Horror Picture Show on our university campus. I immediately had a flashback to being terrified of the VHS cover of this movie as a child after finding it on the bookshelf in the family room. It was just a pair of blood red lips, the title in a menacing font. I put my foot down, refused to watch it with my friends, and found myself in a classroom 30 minutes later watching the opening credits. And thus began my love for this ridiculous, fabulously bizarre film.

Directed by Jim Sharman, The Rocky Horror Picture Show was released in 1975, but prior to that it was a 1973 stage production created by Richard O’Brien (who co-wrote the film’s screenplay and also played a lead role). The film watches as a young couple becomes engaged and then finds themselves stranded with a flat tire during a storm. Hoping to find a phone they approach a large castle where they meet a handful of the most peculiar characters. The film follows their night as they play the role of guests humouring their strange host and bearing witness to this odd household and its inhabitants. If I were to start mentioning details, a lot of confusion would ensue. 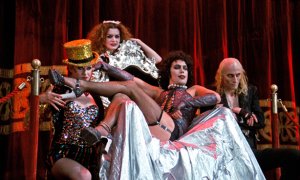 Tim Curry plays the fabulous Dr. Frank-N-Furter who enjoys strutting around in 5-inch heels and sparkly corsets. Susan Sarandon, looking young and fresh faced, Barry Botswick, Charles Gray, and Meat Loaf also star in this cult classic. This film was like nothing any one had every seen before. The puns, the blatant sexual humour, the reference to homosexuality (remember, this was the 70’s) the costumes, and the overall craziness of the film swirled together to make what is now the longest running theatrical release in cinematic history.

The music used in the film doesn’t fit the typical structure of musicals like Mamma Mia or Hairspray. Songs from those films seem to convey the characters feelings so emotionally and organically. In this film, songs are used to shock the audience, whether it’s Curry making his entrance looking like a vampire drag queen or Meat Loaf bursting out of a freezer back from the dead, or Sarandon confessing she’s a virgin, then proceeding to…ahem, eradicate that, with Curry’s boy toy creation. These are not songs you sing lovingly to the man of your dreams or to your daughter because she means so much to you. These songs are more of the punch-in-your-throat variety. They appear out of nowhere, usually accompanied by some “folk dancing” or a lot of running around, and they get a little more ridiculous as the film continues. The music, especially as the story follows the young couple into mad scientist’s castle, become Frank-N-Furter’s props as he reveals the kind of bizarre life he leads and his unusual hobbies.

Despite all of these fantastic elements that make this movie the stuff of weird legends, the film got off to a very slow start. It wasn’t doing well in theaters, so it was suggested that it be shown as a “midnight movie”, something that only screens in the late evening. Once that began happening, it exploded. The same people began to see multiple showings constantly and began dressing up like the characters to attend the shows. It wasn’t long after that moviegoers began quoting the film word for word at the front of the theater like a live action skit. Props were seen next and the result, after 40 years of evolution, is a movie experience that everyone should experience at least once.